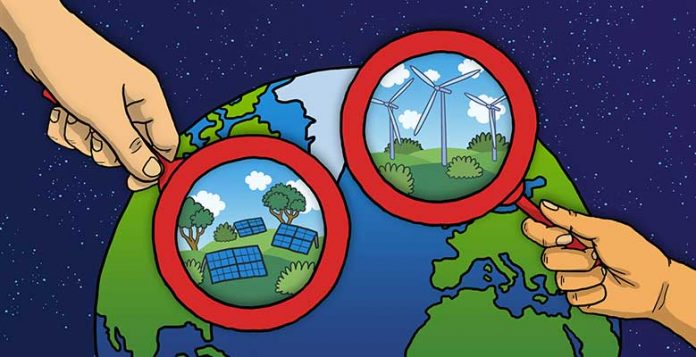 Only clear targets can transform rational self-interest from a potentially catastrophic force into a powerful driver of beneficial change. Once investors know that the non-negotiable endpoint is zero carbon in 2050, they will desert any company whose plans are incompatible with that objective.

Easter visitors to London have found some streets and buildings occupied by “Extinction Rebellion” activists, warning of climate catastrophe and rejecting “a failed capitalist system.” Followers of central bank thinking have seen the governors of the Bank of England and Banque de France warning that climate-related risks threaten company profits and financial stability.

Both interventions highlight the severity of the climate challenge that the world faces. But warnings alone won’t fix the problem unless governments set ambitious but realistic targets to eliminate carbon dioxide and other greenhouse-gas emissions, backed by policies to ensure the targets are achieved. Zero net CO2 emissions by 2050 at the latest should be the legally defined objective in all developed economies.

The central bank governors’ statement, together with steps to require clearer company disclosure of climate-related risks, has fueled optimism in some quarters that a free-market solution is possible. With falling renewable-energy costs threatening to leave fossil-fuel companies with loss-making “stranded assets,” well-informed investors hopefully withdraw funding from companies still searching for new oil or gas reserves or from automotive companies still committed to gas-guzzling SUVs.

But there are limits to what better information and foresight alone can achieve. The same capitalist dynamism that reduces renewable-energy costs is also dramatically lowering the costs of shale-gas production. And fossil fuels may always be the cheaper option for some purposes unless governments impose emissions taxes or regulations to favour lower-carbon technologies. If those taxes or regulations are postponed, too long, forward-looking but cynical investors will be able to profit from projects that bring climate catastrophe closer. The Extinction Rebellion activists are right that left to itself, capitalism cannot solve this problem, no matter how perfect the financial-disclosure regime.

Instead, the activists argue for public commitments to achieve zero net emissions by 2025. But “zero by 2025” would mean a huge hit to living standards, threatening public support for less extreme but still effective action. Britain would have to remove gas central heating from over 20 million homes, and it would be almost impossible to build wind and solar capacity fast enough to deliver equivalent energy in the form of electricity. Zero emissions would also mean no gasoline or diesel cars. While city dwellers could manage without them, people living in rural areas and small towns could not do so as early as 2025, given the likely costs and range of electric vehicles. As the French gilets jaunes have shown, opponents of a rapid energy transition can also occupy streets. We need time to manage the path to a zero-carbon economy.

So how much time do we have? The best scientific evidence, set out in the Intergovernmental Panel on Climate Change’s latest report, says the objective should be to limit global warming to 1.5° above preindustrial levels. That would require global CO2 emissions reaching zero by 2050 or very soon after.

Achieving that will require big investments in new energy sources and improved energy efficiency. But it is undoubtedly technically possible, as the recent “Mission Possible” report from the Energy Transitions Commission sets out. Given 30 years, rather than five, and much sooner in developed economies, we could progress to a world with no gasoline or diesel vehicles. And we could decarbonize steel and cement production, shipping, and aviation, and deliver the massive increases in zero-carbon electricity production required to reconcile higher living standards in developing countries with a sustainable planet.

The aggregate economic costs of this transition will be low and, in some sectors, trivial. Making autos with zero-carbon steel in 2040 or 2050 will likely add less than 1% to production costs and prices. But we will need the popular acceptance of some additional costs and behavioural changes. Zero-carbon aviation is likely to be appreciably more expensive – perhaps by 10-20% – and there is currently no certain route to zero-emissions agriculture without big reductions in the consumption of red meat.

To ensure rapid progress toward a net-zero global economy, countries should set legally binding targets. The UK’s 2008 Climate Change Act currently demands an 80% reduction below 1990 levels by 2050, and the five-yearly intermediate targets set by the Climate Change Committee (CCC) have driven significant progress, with 2017 emissions down over 40% (versus Germany’s 28% reduction) and the carbon intensity of electricity generation cut 60% in the last ten years.

But progress in road transport has been undermined by inadequate government policies and industry lobbying to water down European Union regulations. In addition, the latest scientific evidence indicates that an 80% reduction is inadequate.

The collapsing cost of renewable power and batteries has, however, cut the cost of more rapid progress. On May 2, the UK CCC will, therefore, recommend a significant tightening of the target, which should and probably will demand zero emissions by 2050. Crucially, zero must mean zero, with the UK running its economy on a truly zero-emission basis, rather than purchasing so-called offsets from other countries.

All other developed economies should now commit to that zero-by-2050 objective, and earlier still in countries blessed with abundant hydro, wind, or solar power. So, too, should China, which aims to be – and almost certainly will be – a fully developed high-income economy by 2049. Setting clear final and intermediate targets – embedded in legislation – will in itself drive strong action; once the pathway is defined, the political debate can focus on the specific policies required to achieve it.

And once investors know that the non-negotiable endpoint is zero carbon in 2050, they will indeed desert any company whose plans are incompatible with that objective. Only clear targets can transform rational self-interest from a potentially catastrophic force into a powerful driver of beneficial change.

Adair Turner, a former chairman of the United Kingdom’s Financial Services Authority and former member of the UK’s Financial Policy Committee, is Chairman of the Institute for New Economic Thinking. His latest book is Between Debt and the Devil.