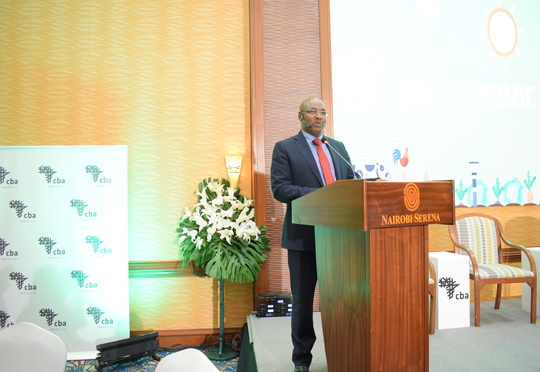 The quarterly CBA Economic Forum was launched early this year with the main objective of discussing key thematic issues regarding Kenya’s economy and policies that affect businesses. The forum targets key decision makers in corporate and public institutions with the key focus being unpacking the Big Four Agenda.

Speaking during the breakfast event, Mr Jeremy Ngunze, Chief Executive Officer, CBA Kenya, said, “The correlation between agriculture and economic performance remains positive and strong. Agriculture remains the mainstay of our economy directly accounting for over 25% of GDP and indirectly, contributing 27% of the country’s GDP. The sector employs over 75% of the country’s workforce and generates nearly half of the country’s export earnings.”

According to the Food and Agriculture Organization of the United Nations (FAO), Kenya has the largest, most diversified economy in East Africa with agriculture being the backbone of the economy and also central to the country’s development strategy. More than 75 per cent of Kenyans make some part of their living in agriculture, and the sector accounts for more than a fourth of Kenya’s gross domestic product (GDP).

The role of agriculture has been crucial in economic development and poverty reduction, yet, investments in the sector remain low and volatile. According to the Africa Union Maputo declarations on Agriculture and Food Security, governments committed to investing at least 10% of their annual budgets to agriculture which will help unlock the 6.0% growth potential for the sector.

Mr Ngunze added, “The political goodwill by the government in transforming the sector through making food security a key pillar in the Big Four Agenda is a welcome step in the right direction. As good corporate citizens, we at CBA will partner with key players in the sector that we may collectively achieve these fundamental goals.”