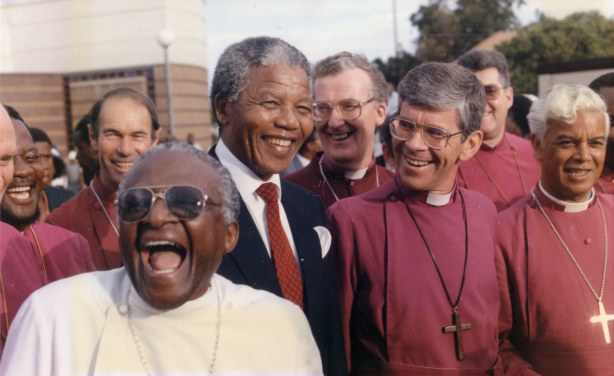 On 2 February 1990 President F W de Klerk told Parliament that Nelson Mandela would be a free man but he did not say when. In Cape Town angry protestors took to the streets.

February is black history month in the United States. In South Africa it’s a time when we remember that day in 1990. This week many of us have been commemorating the joy and the drama. A filmmaker recalls how she smacked a man for telling her De Klerk was going to free Madiba.

In Cape Town February is the sweltering heart of the summer when the wind stops dead in its tracks. When the phone rings that Saturday morning there is a lazy stillness sitting in the house. A journalist in Stockholm tells me something that sends the sultry slowness away.

My colleagues have been camping outside Victor Verster and Pollsmoor prisons for many days since the announcement by the President F W de Klerk at the opening of Parliament on 2 February 1990 that Madiba would be free soon.

“De Klerk is having a press conference this afternoon at 5 pm,” says the Foreign Editor at Sweden’s Expressen across the long distance phone line. Years ago I ditched the confines of white owned local newspapers for the relative freedom of being a foreign correspondent for the Nordic media.

I tell my 10-year-old son the beach is not going to happen today and make my way to the Parliamentary precinct downtown. I’ve never ever been inside the houses of Parliament. A few years before my application for media accreditation is turned down. The refusal comes after many forms and three hours of Caledon Square Security police interrogation in a windowless room – it has a drain and a tap in one corner that makes my terrified mind go haywire.

I park my car around the corner from the notorious police headquarters and make my way to the H F Verwoerd building, the gateway to the precinct. The usual gaggle of correspondents is gathered in an inner sanctum of this featureless grey block named after a man who said it was “absurd” to teach black children mathematics.

As I sit there taking notes about the biggest event in my professional life, there is a part of me that does not believe what the last white president, flanked by middle aged Afrikaners in dark suits, is telling us.

Filmmaker Beverley Mitchell says her incredulity, and emotional state led her to attack a white foreigner. Even after all this time she tells the story with a passion as if it has just happened and I am the first person to hear the account. The day the announcement is made she is a marshal among the crowds protesting the annual opening of Parliament in the streets of Cape Town.

“I was very harassed on the corner of Wale and Adderley streets watching a group of angry, marauding activists demanding the release of Mandela and unbanning of the ANC. A Finnish journalist turned to me and said, ‘but De Klerk has just unbanned the ANC and announced the release date of Nelson Mandela’. I smacked him. I said to him, ‘De Klerk is not going to release Mandela or unban the ANC, we are!’ When we got to the Grand Parade and Cheryl Carolus made the announcement I realised, Oh My God, it was actually true.”

The following Sunday when Madiba is released from the Victor Verster prison near Paarl and taken to the city to make his ‘maiden speech’ from the balcony of the City Hall, Beverley is once more a marshal for the Mass Democratic Movement (formerly the United Democratic Front or UDF).

“By the time we saw Mandela we were shouting, ‘Why don’t you go back to Pollsmoor’. It’s because of the madness. As marshals we were being attacked by the crowd that was getting hotter and more frustrated. There was no water or food for the people. They were waiting from 7 o’clock in the morning.”

Instead of taking Madiba straight to the thousands gathered on the Grand Parade in front of Cape Town’s City Hall, the political leaders take him to a house elsewhere in the city for safety.

“Eventually at 5 o’clock when the affirmative looting started, they brought him out. At this point we had had some APLA guys trying to stab us because they kept on saying we know where Mandela is. I covered my t-shirt with a jersey even though it was so hot because I didn’t want to be identified as a marshal. When I saw Madiba when he came onto the stage we were shouting ‘Why don’t you go back to Pollsmoor!’ We were so angry. We kept on asking the leadership, ‘Where is he?’ No, they said, they’re keeping him somewhere because the crowd is too rowdy and too angry. I said, ‘But they gonna get angrier unless they see him’. And then everything calmed down when he came onto the stage. It was one of the worst days of my life.”

“He knew that it wasn’t De Klerk releasing him – that was a physical act. It was the events of the past that had actually created the conditions for his release and he was his own liberator.”

Talking at the Nelson Mandela Foundation’s special commemorations, Trevor explains the hours Madiba went ‘missing’ that day. He says he was driving Valli Moosa, Jay Naidoo and the Chair of the Mandela Reception Committee, Cyril Ramaphosa, who discharged himself from hospital in Johannesburg where he was being treated for pneumonia.

“On hearing that Mandela would be freed, Ramaphosa had ripped the intravenous drip from his arm and rushed to Cape Town,” says Manuel.

The Madiba convoy gets to hear about the looting and chaos at the Parade. The panicky group takes Madiba to an activist’s house in Rondebosch East.

Meanwhile Manuel moves from place to place around the City Hall looking for Mandela. Finally he is directed to a traffic officer who has someone on his two-way radio who wants to talk to him. It is a Security Policeman.

“You must go and fetch Nelson Mandela and bring him now – Over,” he orders Manuel.

“We have an idea,” Manuel lies.

“I don’t think you know where he is. We can see because we’ve got networks and so on and we’re also using a chopper. He is in Rondebosch East.”

They finally arrive at the house of activist Saleem Mowzer, where they find Mandela, who has taken off his shoes, sitting and sipping a cup of tea.

“I was wondering what had happened to you chaps,” Mandela says.

As the sun slips behind Table Mountain, they return to the City Hall where the 60 000-strong crowd has been waiting in the summer heat all day.

“Madiba was ready to make his speech, the microphone was lousy and he didn’t have spectacles,” says Manuel.

“I stand here before you, not as a prophet, but as a humble servant of you, the people.”

On the other side of the ‘fence’ we created in South Africa a young Hansard Reporter Marina Griebenow gets an advance copy of F W de Klerk’s historic announcement. Marina who is now the Senior Procedural Advisor in the National Assembly is the only official left in Parliament who was also in the house that day in 1990. Hansard is the official record of the Parliamentary proceedings: She says:

“What an exhilarating, uncertain, stressful and above all hopeful time that was! In the Hansard bay my colleague and friend the late Ignatius van der Westhuizen and I had a hard copy of the speech… He was responsible for the translation. Obviously the speech was embargoed until delivery. I helped to usher guests into the gallery and slipped into the Hansard bay shortly before the House was due to start. Ig of course couldn’t wait to relate the astounding turn of events.

“I pinched his leg black and blue and nearly expired because we had to maintain a deadpan expression while on the inside we were ready to burst! I mean while we were sitting there, masses of people gathered at the Grand Parade, demanding that Mr Mandela be released. All the while we knew! We couldn’t wait for Mr De Klerk to reach the part that contained the stupendous announcement. The facial expressions and exclamations of shock and joy were priceless!”

As I am writing this story I see a Facebook post from my friend and colleague Marianne Thamm, the author. She writes about her 10-year-old daughter Kenya:

“Yesterday our youngest tells me that she can’t believe how ‘stupid’ some kids in her class are. She tells me; ‘They don’t know who Nelson Mandela is and what apartheid was’… ‘How did this conversation come about?’ I ask. Turns out she took one of my political t-shirts to use for art classes and some children didn’t know who the guy on the front was (no, really). So she gave a little bit of a history lesson. All ten years of her.”

I chat with Marianne about her post and she says: “What is shocking to me is that her fellow pupils at the age of 10 don’t know. How does this happen. I did ask what colour the child was and I wasn’t surprised at the answer. I really think there has to be a national intervention at schools. How the F are these children ever going to come to terms with who we are, who they are, where they come from?

“Why are we afraid to tell white children about their past? Or is it that parents don’t know how? I wrote a very brief history for my children when Layla asked me, after looking at a photo of Madiba I have, why he went to jail if he was a ‘good guy’. They were small then and I told them the story in terms they would understand that white people had been ‘selfish’ and had refused to share. That everyone in the country was sad for a long time etc.”

It seems crazy that we should have a black history month in an African country but if we’re still struggling to tell our story in all its complexity perhaps an annual focus on our past is not such an absurd notion.

Even cooling off at the beach in the February heat waves reminds me of a time before 1990 when such a simple pleasure was just not possible. Every child should know that.

Sylvia Vollenhoven is a writer, award-winning Journalist and filmmaker. A play she co authored, My Word, Redesigning Buckingham Palace, received a five-star critique during a run on London’s West End. My Word as well as Cold Case – Revisiting Dulcie September, another play she co wrote with Basil Appollis was chosen for the 40th anniversary of the Grahamstown National Arts Festival. The play received the Adelaide Tambo Human Rights Award. Her cross platform project, The Keeper of the Kumm, an Ancestral historical story was showcased as part of the National Film & Video Foundation (NFVF) slate at the Cannes Film Festival. SA Producer for the BBC 2-part mini series Mandela the Living Legend. A Knight Fellow who led a project to improve coverage of poverty and development issues in Ghana for the Bill & Melinda Gates Foundation. As the Africa representative for the Thomson Foundation (UK) she was the lead trainer for the Foundation’s first-ever documentary filmmaking course at Cardiff University in 2008. In the early 90’s, Vollenhoven was the Southern African Correspondent for the Swedish newspaper, Expressen, and was awarded Sweden’s top journalism prize by Scandinavia’s prestigious Publicist Klubben. In her spare time she does yoga and breathes very deeply.