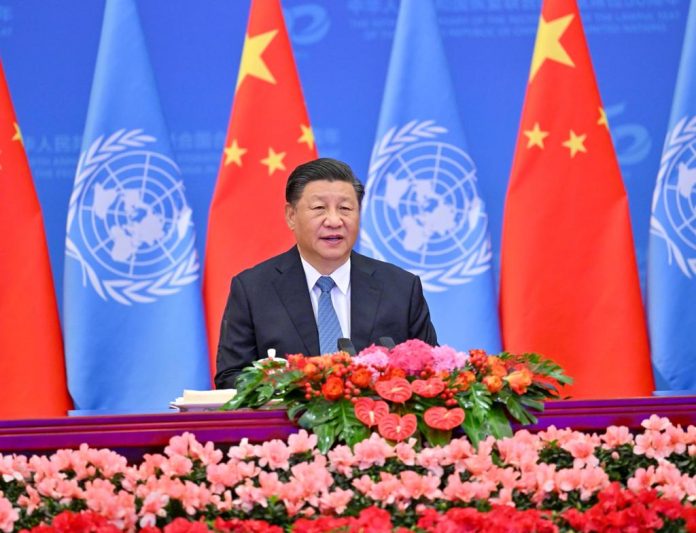 At a recent meeting in my consulate, I told several of Nigeria’s veteran diplomats that China will always cherish and appreciate the valuable support from African countries in restoring the lawful seat of the People’s Republic of China in the United Nations. This reminds those veteran diplomats of happy and beautiful memories of their work on making the United Nations General Assembly (UNGA) Resolution 2758 a complete success. The Resolution was adopted with an overwhelming majority of votes at the 26th session of the UNGA on October 25, 1971, which restores all the rights of the People’s Republic of China at the United Nations. Most of the supporting votes came from African counties. The passage of the resolution represented a significant victory of the diplomacy of China as well as the forces of justice in the world.

President Xi stressed that the restoration of New China’s lawful seat in the United Nations was a momentous event for the world and the United Nations. It came as the result of joint efforts of all peace-loving countries that stood up for justice in the world. It marked the return of the Chinese people, or one-fourth of the world’s population, back to the UN stage. The importance was significant and far-reaching for both China and the wider world.

President Xi further highlighted that the past five decades since New China restored its lawful seat in the United Nations have witnessed China’s peaceful development and its commitment and dedication to the welfare of all humanity.

– For these 50 years, the Chinese people have demonstrated an untiring spirit and kept in the right direction of China’s development amidst changing circumstances, thus writing an epic chapter in the development of China and humanity. Building on achievements in national construction and development since the founding of New China, the Chinese people have started the new historical era of reform and opening-up, and successfully initiated and developed socialism with Chinese characteristics. We have achieved a historic breakthrough of leaping from a country with relatively low productivity to the second-largest economy in the world. Through much hard work, the Chinese people have attained the goal of fully building a moderately prosperous society on the vast land of China, and won the battle against poverty, thus securing a historic success in eradicating absolute poverty. We have now embarked on a new journey toward fully building a modern socialist country and opened up bright prospects for the great rejuvenation of the Chinese nation.

– For these 50 years, the Chinese people have stood in solidarity and cooperation with people around the world and upheld international equity and justice, contributing significantly to world peace and development. We have unswervingly followed an independent foreign policy of peace, stood firm for fairness and justice, and resolutely opposed hegemony and power politics. The Chinese people are a strong supporter of other developing countries in their just struggle to safeguard sovereignty, security and development interests. The Chinese people are committed to achieving common development. From the Tazara Railway to the Belt and Road Initiative, we have done what we could to help other developing countries, and have offered the world new opportunities through our own development. During the trying times of the COVID-19 pandemic, China has been active in sharing COVID response experience with the world, and has sent large quantities of supplies, vaccines and medicines to other countries, and deeply engaged in science-based cooperation on COVID-19 origins tracing, all in a sincere and proactive effort to contribute to humanity’s final victory over the pandemic.

– For these 50 years, the Chinese people have upheld the authority and sanctity of the United Nations and practised multilateralism, and China’s cooperation with the United Nations has deepened steadily. China has faithfully fulfilled its responsibility and mission as a permanent member of the UN Security Council, stayed true to the purposes and principles of the UN Charter, and upheld the central role of the United Nations in international affairs. China has stood actively for a political settlement of disputes through peaceful means. China has been among the first countries to meet the UN Millennium Development Goals. It has taken the lead in implementing the 2030 Agenda for Sustainable Development. China has acted by the spirit of the UN Charter and the Universal Declaration of Human Rights, and earnestly applied the universality of human rights in the Chinese context. It has blazed a path of human rights development that is consistent with the trend of the times and carries distinct Chinese features, thus making a major contribution to human rights progress in China and the international human rights cause.

President Xi emphasized that the trend of the world, vast and mighty, prosper those who follow it and perishes those who go against it. In the world today, changes unseen in a century are accelerating, and the force for peace, development and progress has continued to grow. It falls upon us to follow the prevailing trend of history, and choose cooperation over confrontation, openness over seclusion, and mutual benefit over zero-sum games. We shall be firm in opposing all forms of hegemony and power politics, as well as all forms of unilateralism and protectionism.

– We should vigorously advocate peace, development, equity, justice, democracy and freedom, which are the common values of humanity, and work together to provide the right guiding philosophy for building a better world. Peace and development are our common cause, equity and justice our common aspiration, and democracy and freedom our common pursuit. Diversity makes human civilization what it is, and provides a constant source of vitality and driving force for world development. No civilization in the world is superior to others; every civilization is special and unique to its own region. Civilizations can achieve harmony only through communication and can make progress only through harmonization. Whether a country’s path of development works is judged, first and foremost, by whether it fits the country’s conditions; whether it follows the development trend of the times; whether it brings about economic growth, social advancement, better livelihoods and social stability; whether it has the people’s endorsement and support; and whether it contributes to the progressive cause of humanity.

– We should jointly promote the building of a community with a shared future for mankind, and work together to build an open, inclusive, clean and beautiful world that enjoys lasting peace, universal security and common prosperity. Humanity should overcome difficulties in solidarity and pursue common development in harmony. To build a community with a shared future for mankind is not to replace one system or civilization with another. Instead, it is about countries with different social systems, ideologies, histories, cultures and levels of development coming together for shared interests, shared rights and shared responsibilities in global affairs, and creating the greatest synergy for building a better world.

– We should stay committed to mutual benefit and win-win results, and work together to promote economic and social development for the greater benefit of our people. Development is meaningful only when it is for the people’s interest, and can sustain only when it is motivated by the people. Countries should put their people front and centre, and strive to realize development with a higher level of quality, efficiency, equity, sustainability and security. It is important to resolve the problem of unbalanced and inadequate development, and make development more balanced, coordinated and inclusive. It is also important to strengthen the people’s capacity for development, foster a development environment where everyone takes part and has a share, and create a development paradigm where its outcome benefits every person in every country more directly and fairly. Not long ago, at the 76th Session of the UN General Assembly, President Xi proposed a Global Development Initiative with the hope that countries will work together to overcome impacts of COVID-19 on global development, accelerate the implementation of the 2030 Agenda for Sustainable Development, and build a global community of developers with a shared future.

– We should step up cooperation, and work together to address the various challenges and global issues facing humanity. Only with more inclusive global governance, more effective multilateral mechanisms and more active regional cooperation, can these issues be addressed effectively. Countries need to take concrete actions to protect Mother Nature. We need to encourage green recovery, green production and green consumption, promote a civilized and healthy way of life, foster harmony between man and Nature, and let a sound ecology and environment be the inexhaustible source of sustainable development.

– We should resolutely uphold the authority and standing of the United Nations, and work together to practice true multilateralism. Countries should uphold the international system with the United Nations at its core, the international order underpinned by international law and the basic norms of international relations based on the purposes and principles of the UN Charter. International rules can only be made by the 193 UN member states together, and not decided by individual countries or blocs of countries. International rules should be observed by the 193 UN member states, and there is no and should be no exception. Countries should respect the United Nations, take good care of the UN family, refrain from exploiting the Organization, still less abandoning it at one’s will, and make sure that the United Nations plays an even more positive role in advancing humanity’s noble cause of peace and development. China will be happy to work with all countries under the principle of extensive consultation, joint contribution and shared benefits to explore new ideas and new models of cooperation and keep enriching the practice of multilateralism under new circumstances.

President Xi concluded that a review of the past can light the way forward. Standing at a new historical starting point, China will stay committed to the path of peaceful development and always be a builder of world peace. China will stay committed to the path of reform and opening-up and always be a contributor to global development. China will stay committed to the path of multilateralism and always be a defender of the international order. As an ancient Chinese poem reads, “Green hills immerse in the same cloud and rain. The same moon lights up towns however far away.” Let us join hands, stand on the right side of history and the side of human progress, and work tirelessly for the lasting and peaceful development of the world and for building a community with a shared future for mankind!