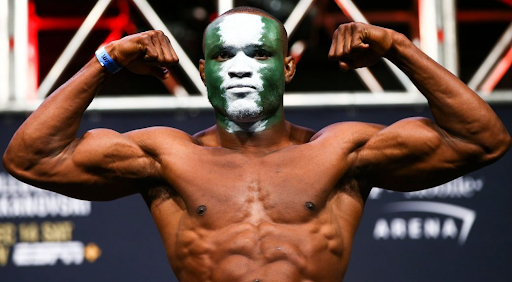 Nigeria’s Kamaru Usman successfully defended his UFC welterweight title on Sunday, February 14, 2021, when he kicked out his Brazilian opponent, Gilbert Burns, in a match.

Initially beginning on a front foot, Burns threatened early to be a tough opponent who would trouble Kamaru aka the ‘Nigerian Nightmare’, but it was not to be as he surrendered to the superior force of Kamaru after a jab sent him to the ground, which was followed immediately with a pounce and several pounding punches to round up the move.

Kamaru, 31, has been the holder of the title since March 2019, and has now successfully defended his belt 3 times since then. His overall record as a professional fighter impressively stands at 18 wins to one loss in 19 fights. Along with his title defence, Kamaru has now broken the record for most consecutive wins by a 170lbs fighter in the promotion.

For the man who was once a teammate of the ‘Nigerian Nightmare’, Kamaru appreciated Gilbert Burns with the following words on Twitter:

“You deserved to be in there with me. You’re the next best in the division”

Kamaru is of Nigerian heritage, although known as a Nigerian-American professional mixed martial artist. He currently competes in the welterweight division of the Ultimate Fighting Championship (UFC), having also had history as a former freestyle wrestler and graduated folkstyle wrestler. He has been active since 2012.