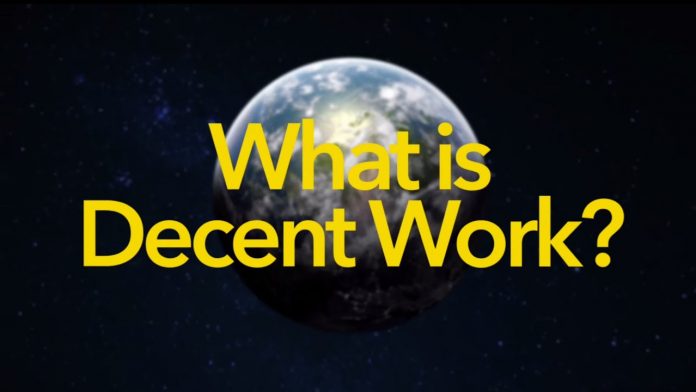 “Young people should not just endeavour to get into the workforce, but also to drive it post-pandemic.”

Work for young people is significant for various reasons: they are a key vehicle for the social, economic, and political inclusion of groups and individuals, and a lack of jobs can lead to discontent and unrest among dissatisfied young people.

This explains why the focus on strengthening young people’s knowledge and skills is critical in Africa, home to the world’s youngest population. The youths are the future workforce of the region, with about 11 million young people expected to enter the labour market each year for the next decade.

Hence, compelled to help support their families, many drop out of school prematurely and end up in precarious and low productivity employment, with few opportunities for advancement.

They are often disproportionately involved in agricultural activities, which tend to have lower labour productivity and offer lower earnings and profits than do industry and services. And in many countries, they are more likely than adults to be in unpaid work, contributing to family household enterprises.

To that end, the International Labor Organization (ILO) released its statistical brief last year to find out how severe the implications were, especially for youth.

It indicated that the implications were particularly severe for youngsters in three dimensions. Which were:

(1) disruptions in education, training, and work-based learning; (2) greater challenges for young job seekers and newcomers to the labour market; and (3) job and income losses, as well as worsening employment quality.

With these trajections continuing to take shape, the United Nations estimated last year that without significant efforts, it might just take another 68 years for the African continent to achieve equal pay.

Similarly, the African Development Bank stated in a press release that one-third of Africa’s almost 420 million youngsters aged 15 to 35 are unemployed and discouraged; another third are insecurely employed, and only one in six are employed on a salary basis.

Nonetheless, during the early phases of the crisis, limited labour force survey data (April 2020) revealed a substantial drop in youth employment and a surge in youth unemployment, particularly among young women.

Youths were disproportionately affected by the pandemic-related economic crisis, which resulted in reductions in working hours, earnings, and jobs, due to the overrepresentation of adolescents in specific sectors that were particularly sensitive to lock-down measures.

Accordingly, this aggregate figure masks considerable variation in employment losses by gender and country income level. International Monetary Fund (IMF) on the other hand, warns, that there is substantial uncertainty regarding the extent to which jobs may be displaced.

This is due to the Fourth Industrial Revolution in advanced economies, with estimates ranging from 7% to 60% of existing occupations at risk.

While the question is simple – how do we get more young people, especially from disadvantaged backgrounds, into the workplace? – the answer is incredibly multifaceted.

Both educators and corporations are in the best position to take immediate and effective action to improve the prospects of disadvantaged youth.

For educators, this means offering practical training and tailored programs which address the unique needs of this group, with universities also ensuring their entry pathways are accessible and just.

As we approach the halfway point of the year 2022, disadvantaged young people are only going to become further alienated from the labour market. This could be because the majority of countries currently lack vaccine equality. As a result, the economy will continue to struggle to balance, limiting work possibilities for youth.

It’s no secret that marginalized young people are more likely to be vaccine-hesitant, and vaccination status is becoming a more important factor in hiring decisions.