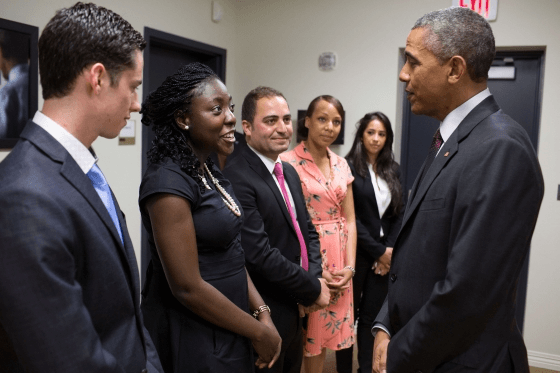 Some 40,000 women in Nigeria stand to die during pregnancy this year.

This statistic became a reality for Adepeju Jaiyeoba, 31, when she lost a close friend to childbirth complications in 2011. The loss jolted her into action.

That year, Jaiyeoba started the Brown Button Foundation, a nonprofit organization that trains birth attendants in Nigeria’s rural villages. To date, the organization has trained more than 8,000 birth attendants, who, like midwives, provide health care to expectant mothers during pregnancy and childbirth.

But Jaiyeoba, a lawyer by trade, quickly realized mothers-to-be in her country needed more than advocacy, and their attendants needed more than training. In 2013, she launched Mother’s Delivery Kit, a social enterprise that provides sterile supplies for childbirth. Each kit costs around $5, and the company employs some 85 people.

Jaiyeoba says the Mother’s Delivery Kit model is not only helping to save women and babies but also bringing income to the people who make and distribute the kits. More than 20,000 kits have been produced.

While these numbers reveal the success of Jaiyeoba’s efforts, they obscure the challenges she has faced. When she first shared her delivery kit idea with a colleague, she was warned not to give up her prestigious job as a lawyer. But after two months, Jaiyeoba became restless and approached someone else: her pediatrician brother.

With savings from her legal work and expert advice from her sibling, Jaiyeoba created 200 sample kits. “We sent out samples to different communities, and we were keen on getting feedback to improve the product,” she said. It soon became clear that birth attendants in other parts of the country had different practices and preferences.

So Jaiyeoba and the team assembled a new kit that they hoped the majority of Nigerians would embrace. One adjustment was to include olive oil — since many Nigerians, particularly in rural areas, rub both the mother and baby in the oil for spiritual protection.

Now that Jaiyeoba had something she knew people would use, she needed to find a better way to get it to them. She began to rethink her supply chain to get around Nigeria’s ailing infrastructure. With grant money from the U.S. African Development Foundation, Jaiyeoba’s team established distribution points in central and eastern Nigeria. Now, the delivery kits no longer need to leave from Lagos, making them more accessible to people in rural areas.

Jaiyeoba became a Mandela Washington Fellow in 2014 and has used her friendships with other fellows to expand her company’s reach. She is working with Ghanaian fellow Laud Ampomah Boateng to provide delivery kits in districts across Ghana and creating a mobile platform focused on prenatal care, child rearing and infertility with Côte d’Ivoirian fellow Jean-Patrick Ehouman.

In May 2015, she was one of five emerging entrepreneurs invited to pitch her idea at a White House event showcasing the impact of U.S. government initiatives. It also set the stage for the upcoming Global Entrepreneurship Summit in Kenya.

The event gave her a chance to look back on the obstacles she faced. “You can actually build business models around social problems,” she said.

Starting her own nonprofit foundation and social enterprise has taught Jaiyeoba a lot. Here is her advice for YALI Network members: