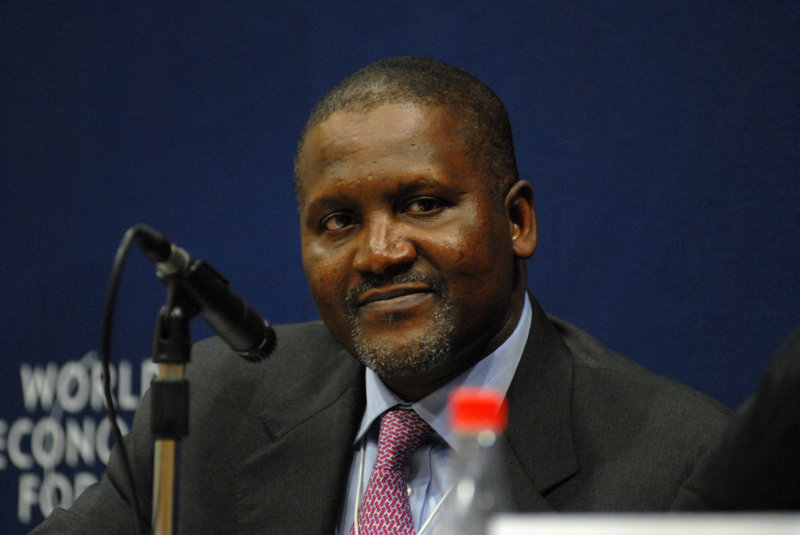 Despite the economic downward spiral in recent times, business magnate Aliko Dangote still retains his title as the richest man in Africa. According to Forbes, Aliko’s loss of $10 .3 billion which is tagged the biggest loss of the year didn’t deprive him of retaining the number one spot in Africa. The head of the Dangote Group is now valued at $14.7 billion as a result of the devaluation of Naira which has inadvertently affected all sectors of the economy.

Other Nigerians who made the 2015 Forbes list of wealth include Femi Otedola, Folorunsho Alakija, Mike Adenuga and Abdulsamad Rabidu.

Alhaji Aliko Dangote has emerged the 23rd richest man on the 2014 Forbes Billionaires List just released. Three other Nigerians – Mike Adenuga, Folorunsho Alakija and Abdulsamad Rabiu – were also listed on this year’s Forbes list of 1,645 billionaires across the globe who together are worth $6.4 trillion.

Africa’s richest man Dangote is not relenting in his quest for wealth as he rose from the 43rd position on the Forbes Billionaires List in 2013 to the 23rd position in March 2014 with a net worth of $25 billion, a 20 per cent rise from $20.8 billion he was worth as of December 2013.

Dangote who ranks 64 on the list of 72 most powerful people who rule the world is looking beyond cement, sugar and flour, the three commodities that built his fortune, to the oil business.

In April, he announced $9 billion in financing from a consortium of local and international lenders to construct a private oil refinery, fertilizer and petrochemical complex in the country, which when completed will be Nigeria’s first and Africa’s largest petroleum refinery. He continues to expand his publicly traded Dangote Cement across the continent, announcing plans in recent months to build new plants in Kenya and Niger.

The self-made billionaire created the Dangote Group, which in addition to cement owns sugar refineries, flour milling and salt processing facilities operating in eight countries, owning the largest cement manufacturer in sub-Saharan Africa. He began trading in commodities more than three decades ago using a loan from his uncle.

Oil and fashion billionaire Folorunsho Alakija who ranks third and 13th in Nigeria and Africa respectively ranked 687 on the Forbes Billionaires List 2014 with a net worth of $2.5 billion. Nigeria’s fourth and Africa’s 23rd richest, Abdulsamad Rabiu, was ranked 1, 372 on the world Billionaires List with a worth of $1.2 billion.

According to Forbes, “our global wealth team found 1,645 billionaires with an aggregate net worth of $6.4 trillion, up from $5.4 trillion a year ago. We unearthed a record 268 new 10-figure fortunes, including 42 new women billionaires, another record. In total, there are 172 women on the list, more than ever before and up from 138 last year.

Bill Gates is back on top after a four-year hiatus, reclaiming the title of world’s richest person from telecom mogul Carlos Slim Helu of Mexico, who ranked No. 1 for the past four years. Gates, whose fortune rose by $9 billion in the past year, has held the top spot for 15 of the past 20 years.

Spanish clothing retailer Amancio Ortega (best known for the Zara fashion chain) retains the No. 3 spot for the second year in a row, extending his lead over Warren Buffett, who is again No. 4. American gambling tycoon Sheldon Adelson, who added $11.5 billion to his pile, makes it back into the top ten for the first time since 2007. Another first: A record net worth of $31 billion was needed to make the top 20, up from $23 billion last year.