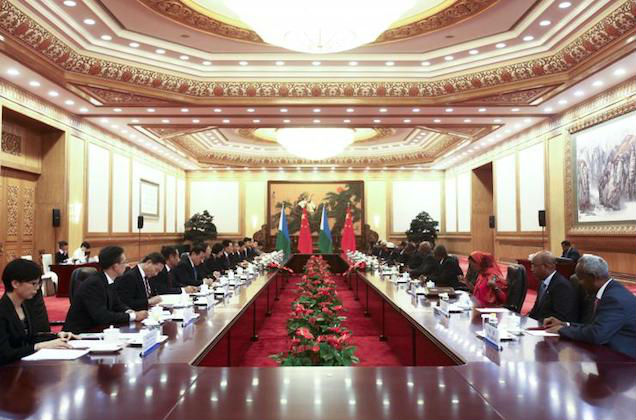 Africa’s biggest trading partner, China, has signed a 10-year deal with Djibouti to build a military outpost in the country. The base is China’s first overseas military base in Africa and it will be used for “escort and humanitarian operations”

China has signed a deal to open a military base in Djibouti. Above, Djibouti’s President Ismail Omar Guelleh (R) and Chinese President Hu Jintao hold talks after a welcoming at the Great Hall of the People, July 18, 2012, in Beijing. Diego Azubel-Pool/Getty Images

China has announced plans to establish its first overseas military base in Africa, signing a 10-year deal with Djibouti to build a military outpost in the Horn of Africa country.

According to reports, the plans signal a major policy shift for Beijing, which has traditionally invested heavily in economic endeavours such a infrastructure development, manufacturing, mining and agriculture amongst others.

IB Times reported that, “China has long had an economic foothold in Africa, but the base would be an expansion of its military prowess beyond the Asia-Pacific region”.

President Xi Jinping this week said China aims to “build a robust national defense and a strong military that corresponds to our country’s international stature, and is adapted to our national security and developmental interests,” the Xinhua news agency reported.

With the planned military outpost, China has emulated the United States, which also operates its only military base in Africa, based in Djibouti at Camp Lemonnier, used for counterterrorism operations on the continent and in the Middle East.

The military base is expected to provide logistical support for Chinese peacekeeping missions, anti-piracy operations in the Gulf of Aden and escort or security for its imports which traverse the seas.