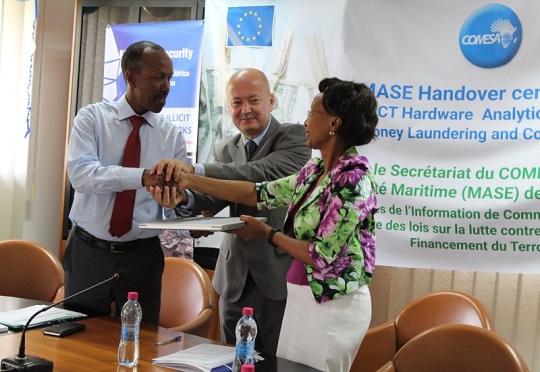 As part of efforts to end financial crime rampage in Djibouti, the Financial Intelligence Unit (FIU) has received from COMESA, Information and Communications Technology (ICT) equipment and analytical software worth over $110,000 to the deal with issues in that regard.

Funded by the European Union, the tools were acquired through COMESA’s Regional Maritime Security (MASE) programme, to help the FIU Unit progress in its analytical work as well as determine the quality of the intelligence disseminated to Law Enforcement Agencies and other relevant stakeholder in support of the country’s daily efforts to fight money laundering and financial crimes.

“This handover we are witnessing today is very important for Djibouti and it will greatly booster our efforts in tackling the different forms of financial crime in this region,” he said.

Mr. Ahmed also commended COMESA and the EU for their provision and support, adding that the Central Bank is more than ready to use it effectively and achieve the desired results.

According to the COMESA Secretary General, Ms. Elizabeth Mutunga, she said that COMESA’s main concern is to strengthen the fight against money laundering, adding that piracy, or any other crime is motivated and propagated by money.

She said: “If the ability for criminals to access their illicit funds arising from criminal activities is made more difficult, then we can expect that the crime will also be reduced and hopefully eradicated.”

Ambassador Adam Kulach, the EU Resident Representative in Djibouti told the bank that fight against money laundering in the region will only succeed if key institutions such as Central Banks are strengthened. He reiterated the EU’s commitment to support the region and urged the Central Bank to put the equipment to good use.

COMESA, has been in connection with Djibouti for a long time and has been assisting the country in other areas including; translating its anti-money laundering and combating the financing of terrorism (AML/CFT) Laws into Arabic, an important step in the country’s endeavor to align its policies to international standards and become a member of the Middle East and North Africa Financial Action Task Force (MENAFATF).