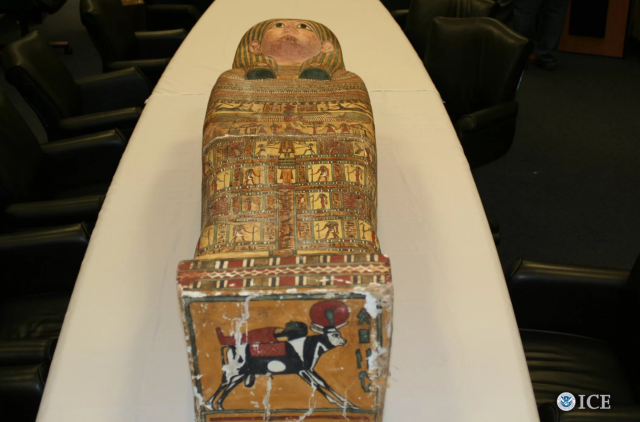 In a statement the Ministry of Tourism and Antiquities in Egypt confirmed the arrival at Cairo airport of many ancient Egyptian items and artefacts which have been in the Museum’s possession of a Bible in Washington DC, United States. According to the report that was announced on Wednesday, this was after years of negotiations to return what was said to be fraudulently acquired items.

The items that were recovered from the United States are close to about 5,000 items that mainly comprises Manuscripts but also includes funeral masks, parts of coffins and the head of stone statues, mummies, Arabic texts, Papyri with hieroglyphic, said Shabaan Abdel – Gawad, Supervisor General Repatriation Department quoted in the statement.

It was also added in the statement that the items which left Egypt fraudulently would be placed in a Coptic Museum in Cairo, the capital of Egypt. It was however not clear how the items left Egypt illegally or ended up at the Museum in Washington DC, the Egyptian authorities have negotiated the return of these items for over several years.

In 2011, during the popular uprising in Egypt against former president Hosni Mubarak, many treasured artefacts were damaged, destroyed or illegally whisked out of the country at the time. As a result of this, thousands of the Egyptian artefacts and items ended up on the International black market, on interest sites, or under several auctions around the world.

The United States Ambassador to Egypt Jonathan R. Cohen has expressed his happiness that these treasures have returned to their homeland. This remarkable achievement, which started in 2016, was made possible through Egypt’s Ministry of Foreign Affairs and the appropriate authorities in the United States, including Homeland Security and the State Department.