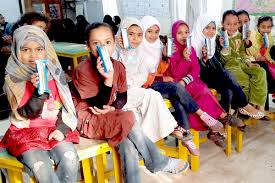 The Egyptian delegation has recently presented at a board meeting, its plan to further expand the National School Feeding Programme (NSFP) so as to reach all government-funded schools.
World Food Programme’s (WFP) strong partnership with the Egyptian Government is crucial in supporting this expansion, as the continuing working relationship between WFP and its government counterparts has been a best practice that ensured expansion of the programme and scale-up of operations.
The Ministry of Social Solidarity developed the strategy, in coordination with the Ministries of Education, Health and Population, Agriculture and Land Reclamation and key stakeholders.
Minister of Social Solidarity, Ghada Wali said “The Government considers school feeding as one of the mechanisms that complements the development of social protection in Egypt from an equity-based approach. School feeding provides children with a nutritional meal that responds to the nutritional needs of school children, improves their cognitive capacities, and also eases some of the financial burden on their families, and the government is exerting efforts to alleviate poverty and to eventually contribute to social and economic development”.
The importance of school feeding has also been stressed by Egyptian President Abdel Fattah El Sisi, who has announced that a national school feeding strategy is a current priority on the State’s agenda.
WFP Acting Country Director in Egypt, Menghestab Haile said “We are working very closely with the Egyptian Government in targeting the communities most in need in Egypt with our school-feeding activities. The date bars that WFP provides to the children in schools are fortified with vitamins and minerals that provide 25 percent of the child’s daily nutritional needs”.
This will contribute to the Egyptian Government’s work towards meeting the Sustainable Development Goals (SDG), signed during meetings of the United Nations last September. SDG2 focuses on eliminating hunger and achieving food security by 2030.
Assistant Foreign Minister for Multilateral Affairs and International Security, Ambassador Hisham Badr also said that “The Egyptian strategy on school feeding is aligned with the 2030 agenda, in particular SDG2 on ending hunger, achieving food security and improving nutrition. The current (Government) programme covers 13.5 million students with total government finances of 957 million Egyptian pounds”.
The European Union is one of the major contributors, along with the United States, Germany, and private-sector members, to school-feeding programmes in Egypt.