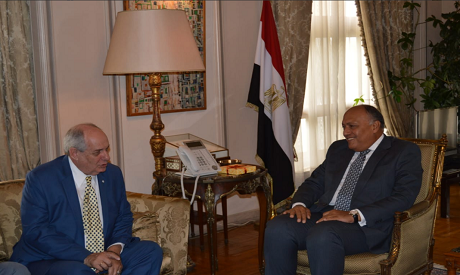 During the meeting, Shoukry stressed on the strong, special ties between Egypt and Greece, which Hafez described as “a friendly relationship and a strategic partnership.”

Hafez said that the tripartite cooperation between Egypt, Greece and Cyprus is a “great module for a fruitful and constructive partnership for the Mediterranean area given the great importance that the leaders of these countries attribute to their joint framework.”

Egypt shares a number of cooperation protocols with Greece and Cyprus that aim to strengthen Egypt’s economic, industrial and commercial relations with its two Mediterranean neighbors.

Hafez added that both officials agreed on the importance of developing economic relations through increasing direct investments as well as intra-trade.

Shoukry also pointed out that Greece could profit from using the economic zone in Egypt’s Suez axis, which is considered the main gateway to Africa.

The two officials also discussed the Egyptian, Greek and Cypriot doctors conference scheduled to take place at the end of this month in London as part of the ‘Nostos: Reviving Roots’ initiative between the three countries.

In April, President Nicos Anastasiades of Cyprus, President Prokopis Pavlopoulos of Greece along with Egypt’s President Abdel-Fattah El-Sisi inaugurated the Nostos initiative in Alexandria. The cultural festival aimed at strengthening relations between the people and governments of the three countries.

The three partners are cooperating closely on several regional and international issues, chief among them security in the Mediterranean.

Earlier this month, President El-Sisi visited the Greek island of Crete for the sixth round of a tripartite cooperation summit between the leaders of the three countries. The summit aimed at evaluating developments in cooperation between the three states and assessing progress on ongoing projects.