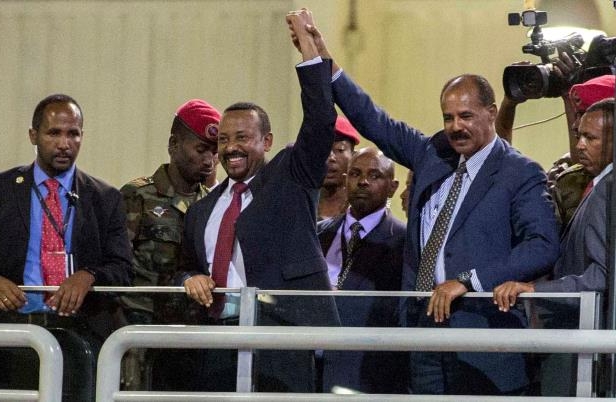 The government of Eritrea reopened its embassy in Ethiopia on Monday 16th of July, 2018 as further evidence of the peace between two countries that ended two decades of military stalemate after a border war in which tens of thousands died. Abiy Ahmed, Ethiopia’s Prime Minister and Eritrea’s President Isaias Afwerki re-opened the embassy in the capital Addis Ababa in a brief ceremony.

A week ago the leaders declared their “state of war” over and Isaias Afwerki spent the weekend in Ethiopia. The leaders jointly raised the Eritrean flag inside a newly refurbished embassy as a military band played Eritrea’s anthem. They then toured the building and looked at its furniture and two rusting cars that belonged to Eritrea’s last ambassador.

The Eritrean leader arrived in Addis Ababa for a three-day visit on Saturday 14th of July, 2018 and thousands lined the Ethiopian capital’s main thoroughfare Bole Road, sporting T-shirts emblazoned with the pictures of both countries’ leaders. The visit comes just days after Abiy visited Eritrea and signed a pact with Isaias on resuming ties, a move that ended a near 20-year military standoff after a border war.

Eritrea formally seceded from Ethiopia in 1993 after a long battle for independence, but the two fought a border war in 1998. A peace deal was signed two years later but Ethiopia refused to implement it, saying it wanted more talks.