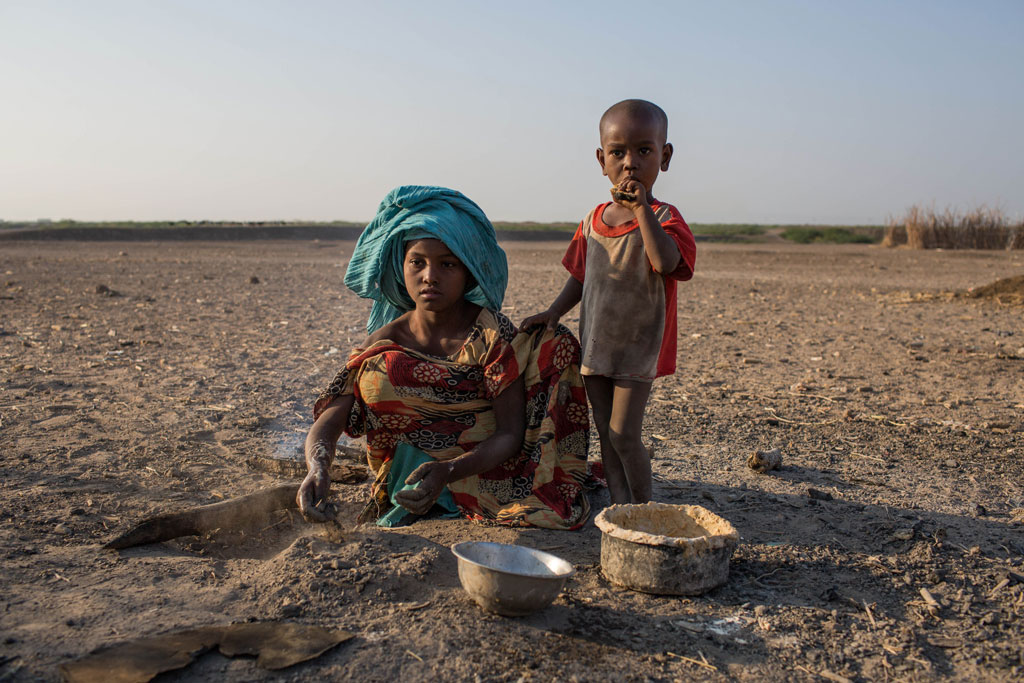 Drought-induced food shortage has been a major challenge for Ethiopia over the last fifty years. The 1973, 1984 and cyclic droughts of recent times have all been caused by El-Nino and also have affected millions of people. But, the ways and means used to handle the recurrent droughts varied through the last three decades.

The 1973 drought and famine was usually referred to as the “hidden” as it remained hidden both from the local and international media when it was gradually engrossing the country.

At the time, the imperial regime established the first Relief Coordinating Commission in 1973 in a desperate attempt to address the drought situation after hundreds and thousands of people and livestock perished due to the total nonchalance of the regime. Response to the drought situation was totally left to major international NGOs and donor agencies that made swift attempt to save lives with no meaningful support from the imperial government. The NGOs and donors depended on their own relief supplies and logistics support, with no meaningful coordination between the government and donor agencies. There was no national relief strategy or policy to speak off. Many of the international NGOs were forced to establish their own coordination offices after being licensed by the security department of the imperial regime. In those days no relief program that focused on coping mechanisms was organized in the rural areas of the country, and millions of livestock perished due to lack of water and fodder. The relief programs wholly excluded livestock. Land fragmentation and degradation, the feudal system of tax payment in kind and cash as well as “corvée” labor exacerbated the already fragile disaster situation in the country.

Exactly ten years after the 1973 drought, another large-scale drought and food shortage occurred not only in the northern part of the country but also in the south and central parts of Ethiopia. The disaster occurred when the ‘Derg’ regime was preoccupied with the preparation work for the formation of the former Workers Party of Ethiopia. Once again, the country was plunged into the most unprecedented drought situation. The regime failed to put in place a strong early warning system and did not prioritize the disaster situation. Once more, the country was left to the mercy of international NGOs, UN systems, and governmental donor agencies. Although the regime managed to reestablish a Disaster Prevention and Preparedness Commission (DPPC), much of the relief programs were conducted by local and international NGOs. They organized rehabilitation programs focusing on agricultural packages and soil and water conservation programs in various parts of the country. Some of them had to depend on their own logistics, which in some cases involved airlifting of relief supplies. This led to heavy dependence on foreign relief aid and rooted dependency syndrome on the rural beneficiaries.

The military regime tried to establish a modest early warning system that had to a certain degree helped to identify the nature of the drought situation in different parts of the country, but the reports were scanty and sometimes full of errors. The government started a ‘villagization’ program, which was totally unpopular among the relief program beneficiaries, as they were forced out of their traditional settlement areas without their own consent and willingness.

However, things are completely different now when it comes to mitigating droughts. Over the last 25 years, the federal government has designed various strategies to handle relief programs as part of the development program of the nation. Besides, more scientific early warning system was put in place, while meteorological information system was upgraded to provide timely weather and climatic information that could serve all sectors including disaster risk management activities.

Furthermore, a new strategy on ‘villagization’ and settlement was put in place to effectively link disaster mitigation with regular development programs like food security, water and sanitation programs, income generation, agroforestry and environmental rehabilitation. The settlement programs were conducted in a planned manner to provide the settlers with basic services like health facilities, schools, potable water schemes, and local road transport and other related infrastructures.

Over the last several years, as the result of participatory rural catchment management and soil and water conservation programs conducted in the country, 23 percent of the landmass of the country is now covered with forest. This year, the country plans to plant new seedlings on 13 million hectares of land. The developmental linkage between environmental protection and rehabilitation programs along with the countrywide food security programs and agriculture extension packages have helped to reduce the area coverage of the country that was originally drought prone.

Moreover, the introduction of small scale irrigation and implementation of water harvesting schemes like micro-dams and homestead ponds in the drought prone areas has to a greater degree reduced the number of drought-affected citizens and had helped to boost food security programs in various regions of the country. In parallel to this, the government strategy of linking relief interventions with development programs has paid off not only in promoting development but has also totally stopped the risk of loss of life due to drought and food shortage.

One of the unique features of Ethiopia’s approach to disaster risk management is the fact that the country undertakes the relief programs using its national resources. Under the prevailing situation of donor fatigue, the government did not choose to sit on the fence while the threat of disaster was looming. Although some international donor countries and UN institutions like FAO have made modest contributions to the national disaster mitigation efforts, Ethiopia relied on local resources to effectively roll back the impending loss of lives due to the drought.

The other fundamental feature of Ethiopia’s approach to disaster risk management is the fact that various programs are comprised in the entire relief package. These included: water tankering, construction of deep and shallow water wells, supply of livestock fodder, and immunization for infants and mothers in drought affected areas. Also, the development of effective logistics for propositioning food – putting in place a viable emergency food reserve stock – has helped the country to effectively manage the disaster risk process on time and with the necessary quality.

Contrary to the stance of all previous regimes, the government of FDRE has already exhibited full and timely commitment to effectively address the risks of drought-induced disaster in the country. This is shown on all disaster-related policies and strategies the government has spearheaded and implemented on the ground. Furthermore, Ethiopia is going through a rapid economic development in all sectors. The two digit economic growth that went on for more than ten years has helped to qualitatively strengthen the national disaster mitigation efforts and had helped to build nationwide confidence in meeting any kind of disaster with full preparedness and viable local resources.

In Ethiopia, all disaster risk management programs are already linked up with the entire economic development of the country. The nation is effectively working with donor agencies, UN systems, and other stakeholders to fight off disaster and food shortage. And this is all done in partnership, and not through one sided spoon feeding scheme that promotes dependency.