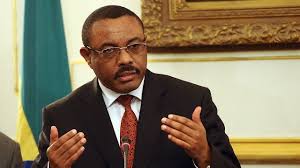 The government played irreplaceable role in supporting women to exercise their political, economic and social rights as guaranteed by the Constitution.

Prime Minister Hailemariam Dessalegn said the government is committed to ensuring participation and benefit of women carrying out necessary activities in all aspects.

Opening the 3rd Ordinary Session of the Ethiopian Peoples’ Revolutionary Democratic Front Women League Thursday, the Premier said that after the demise of the Derg regime, the Front has been working to ensure peace and stability, state building and inclusive development in a way that includes women participation. Thus, women have been making relentless effort as in the days of the armed struggle, he said.

The government played irreplaceable role in supporting women to exercise their political, economic and social rights as guaranteed by the Constitution. In addition, various legal and political frameworks have been adopted to enable women participate in the federal and local leadership, the Premier added.

He further said that women in the rural areas have began to accumulate wealth organized under the agricultural extension packages. The same is true in the urban centers engaged in the MSEs.

As regards social development, he said women have been enjoying access to education from primary up to tertiary level. Besides, in addressing maternal and child mortality, the government has been expanding health services. Presently, mothers at every corner of the country are delivering in health institutions with the help of midwives.

Similarly, on the political affairs over twelve million women are working under the umbrella of many women associations in building democratic system. These associations are key to meet the demands of women through exerting more in the policy and decision making process.

Though results have been registered so far, much remains to be done to ensure maximum benefit of women. Women leagues at various levels shall work to achieve the needed destination, he noted.

Hailemariam called upon the women league to actively take part in fight against rent seeking to create conducive environment for the democratic developmental journey.Benefit