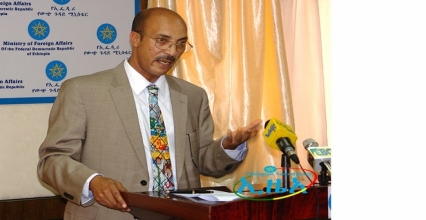 Ethiopia’s bid for a non-permanent seat in the United Nations Security Council, which was launched on February 29, 2016, is gaining momentum, according to Ministry of Foreign Affairs.
The nation’s campaign launched by Foreign Affairs Minister Tedros Adhanom is supported by sisterly African countries and Brazil, among others.
In his regular media briefing today, Tewolde Mulugeta, Spokesperson for the Ministry of Foreign Affairs (MoFA) also underlined the commitment of Ethiopia in keeping peace and security in the region, the continent, and internationally.
According to the spokesperson, the signing of memorandum of understanding between Brazil and Ethiopia would bolster the trade and investment relations of the countries.
The business forum conducted in Addis Ababa will also strengthen the cooperation of the countries in education, agriculture, and technology, according to Tewolde.
The visit of MoFA State Minister Taye Atseke-Sillasie to Canada is also important as it strengthens the political, economic, trade and investment cooperation of the countries, he indicated.