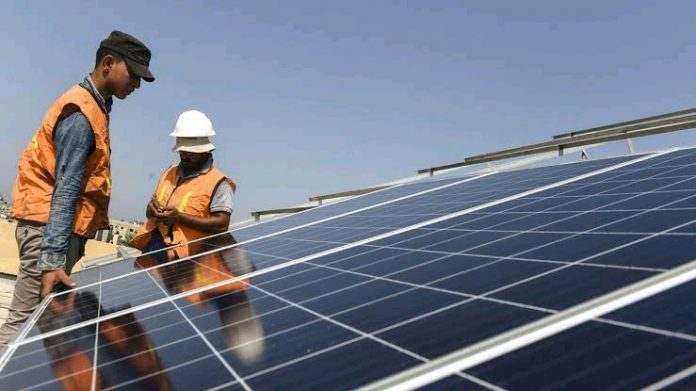 The European Union, EU,  is looking to partner with the UAE to help accelerate the energy transition and infrastructure development in Africa as part of the 27-member bloc’s €300 billion ($321.9bn) Global Gateway strategy, a senior EU official has said.

There is great scope for the UAE, the Arab world’s second-largest economy, and the EU, the world’s biggest trading bloc, to co-operate, especially in Africa, Jutta Urpilainen, EU Commissioner for International Partnerships, told The National.

Ms Urpilainen, who was on a short trip to the UAE, held meetings with Reem Al Hashimy, Minister of State for International Co-operation, and Sheikh Shakhboot bin Nahyan, Minister of State. She also met Abu Dhabi Fund for Development director general Mohammed Al Suwaidi in the capital.

“What I was presenting today to the ministers, but also the fund [ADFD] was the idea to work together, especially in Africa,” Ms Urpilainen said.

“We mainly focused on our partnerships and how to work in Africa together. That’s a priority area for both of us.”

In December, the European Commission launched the Global Gateway strategy that seeks to mobilize up to €300bn in investment between 2021 and 2027 to underpin a lasting global recovery.

The sustainable drive for investment works for “people and the planet” to tackle the most pressing global challenges, from climate change and protecting the environment, to improving health security and boosting competitiveness and global supply chains, the EU said.

Of the planned €300bn investment, the commission has committed €150bn to Africa because “we see that that’s the continent where the needs are highest”, Ms Urpilainen said.

Africa, home to one-sixth of the world’s population, is among the regions worst affected by climate change.

However, hundreds of millions of people on the continent, whose economy was battered by the pandemic, are deprived of electricity. Access to energy is essential for the economic revival of African nations and is necessary for them to meet their climate and sustainable development goals, the International Energy Agency said in a report.

The clean energy transition is an opportunity for many African countries to bypass traditional fuels and infrastructure and adopt sustainable energy systems but they require financial assistance from the international community, the agency said.

The EU estimates more than 600 million people in Africa are without electricity and the bloc aims to provide energy produced through renewable sources to at least 100 million people by 2030 through its Africa EU Energy Initiative.

“It’s a huge amount of people,” said Ms Urpilainen, who has already presented details of the initiative to partners in the Emirates.

“I see a lot of opportunities to co-operate and collaborate.”

The EU, which is deepening its ties with Gulf nations, last month set out a strategy for its future relationship with GCC states that covers everything from global security and trade to green transition and digitalization.

It comes amid heightened geopolitical uncertainty as the Ukraine war and western sanctions on Moscow to punish Russia for its continued military assault are disrupting global food and energy supplies.

Gulf countries are strategically important for the EU, not only for energy but also for trade, Andrea Matteo Fontana, the European bloc’s ambassador to the UAE, told The National in May.

The volume of trade between the UAE and EU climbed to almost $40bn in 2021, the latest EU data indicates.

The UAE, which lies at the crossroads of Asia, Africa, and Europe, already has strong economic ties with several African countries and funds projects through its development financing initiative for emerging nations.

Since its inception in 1974, the ADFD — the UAE government’s economic development arm — has funded projects in more than 97 countries, including close to 40 African nations, through concessionary loans and grants.

Its expenditure in Africa amounts to Dh30bn ($8.17bn). It has also invested in seven companies and two private equity funds to support the growth of a variety of sectors in the continent, the fund said in August last year.

In March, ADFD signed a preliminary agreement with the African Development Bank to further co-operate on investment in sectors to drive sustainable socio-economic development in the continent.

The first step in the UAE-EU partnership is to “bring our technical people together” to develop the framework of cooperation. Particular projects in Africa can be discussed at a later stage, Ms Urpilainen said.

“I would like to see a collaboration at all levels,” she said.