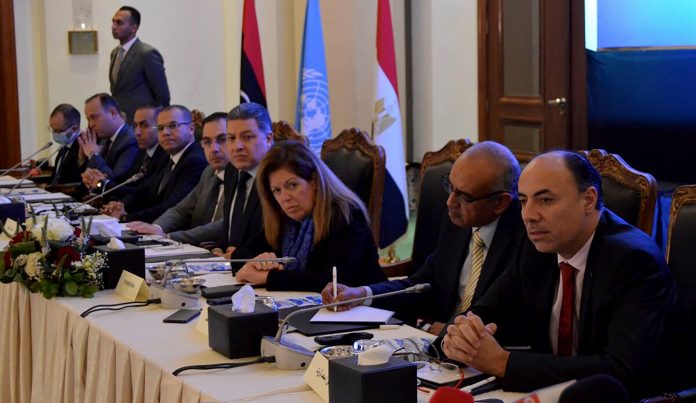 Libyan officials returned to the Egyptian capital on Sunday for a third round of talks on constitutional amendments for elections.

Libya once again finds itself at a political impasse, with two rival administrations claiming legitimacy.

The talks in Cairo follow clashes between rival militias that caused residents of the Libyan capital, Tripoli, to panic and revived memories of previous bouts of fighting in the nation.

Politicians from Libya’s parliament in the east and the High Council of State, an advisory body from western Libya, began the UN-brokered negotiations amid concerted international pressure on the two chambers to put their disputes aside and agree on the election’s legal basis.

The UN special adviser on Libya, Stephanie Williams, said talks in a Cairo hotel would continue until Sunday to establish a constitutional framework “required to take the country to national elections as soon as possible”.

“After eleven long years of division, dysfunction, conflict, chaos, and polarisation, the Libyan people are exhausted,” she told attendees at the opening session.

“You have a real opportunity, indeed a solemn responsibility, to give them hope, to provide a pathway towards elections within a firm constitutional framework.”

In the previous two rounds of talks, the parties came to an initial consensus on 137 articles of the constitutional draft, including on rights and freedoms. They will continue discussing a handful of disputed articles on legislative and judicial authority, Ms Williams said.

The dispute over the constitutional framework of the election was among the major challenges that caused planned national elections to fail in December.

The failure to hold the vote was a major blow to international efforts to end a decade of chaos in Libya. It has opened a new chapter in its long-running political impasse, with rival governments now claiming power after tentative steps towards unity in the past year.

On Friday, clashes broke out in Tripoli between rival militias. Residents took shelter and women and children fled a busy park as artillery shells flew across the night sky. It was not clear what caused the violence. Authorities in Tripoli said an investigation had been opened.

Ms Williams condemned the fighting. She said in a Twitter post: “Enough is enough!” She called for those responsible to be held accountable.

The US ambassador to Libya, Richard Norland, said those responsible for the fighting “will pay a price with the Libyan people and the international community”.

The violence was the latest bout of infighting between rogue militias in recent weeks. This has been a particular problem in the western region, which is ruled by militias loosely allied with the Tripoli-based government of Prime Minister Abdul Hamid Dbeibah.

Libya has for years been split between rival administrations in the east and the west, each supported by various well-armed militias and foreign governments. The Mediterranean nation has been in a state of upheaval since a 2011 Nato-backed uprising toppled and later killed longtime dictator Muammar Qaddafi.

The country’s plan to make the transition to an elected government fell through after the interim administration based in Tripoli, headed by Mr Dbeibah, failed to hold elections last year.

Mr Dbeibah has refused to step down since then, raising questions over his mandate. In response, the country’s eastern politicians have elected a rival prime minister, Fathi Bashagha, a powerful former interior minister who is now operating a separate administration out of the city of Sirte.

In a televised phone call, Mr Dbeibah urged a powerful commander who leads the 444 brigade — which serves his government — to do what is necessary to restore peace in Tripoli.

His rival, Mr Bashagha called in a series of tweets for armed groups to surrender their weapons. Last month, Mr Bashagha entered Tripoli and attempted to install his government there, but left within hours after fighting broke out that killed one person.

Meanwhile, a widening blockade on oil production, largely in the country’s east, has cut off key state revenue in opposition to Mr Dbeibah remaining in power. On Friday, a video announcement by residents and workers of the Sidra oil port, which is key for exports, warned that they would stop operations because of a lack of basic services in surrounding towns.