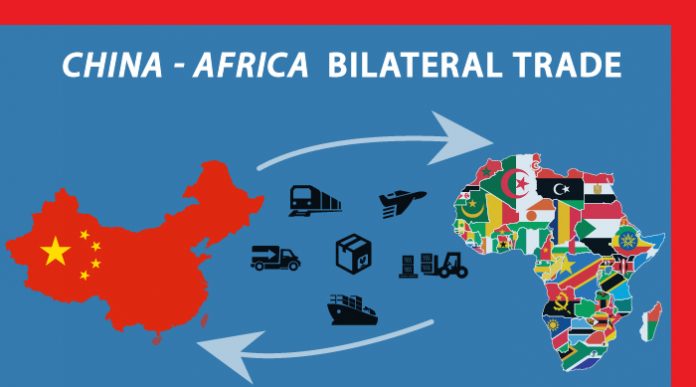 China has been Africa’s largest trading partner for a long time. In 2021 alone, the value of trade between Africa and China rose by 35% to reach $254 billion, mainly due to an increase in Chinese exports to the continent.

Since 2005, one could boldly say that the value of Chinese investment in Africa has passed $2 trillion.

The trade relations between China and the African Continent began in the 7th century and continue through the present day. Nowadays, China seeks resources for its growing consumption and African countries seek funds to develop their infrastructures.

The Chinese government would map out Large-scale structural projects that were often accompanied by soft loans and propose to African countries that are rich in natural resources.

They majorly fund the construction of infrastructures such as roads and railroads, dams, ports, and airports. Sometimes, Chinese state-owned firms build large-scale infrastructure in African countries in exchange for access to minerals or hydrocarbons, such as oil.

In 2009, China surpassed the United States of America to become the largest trading partner in Africa.

Presently, China has signed bilateral trade agreements with over 40 African countries.
In 2000, China-Africa Trade amounted to $10 billion and by 2014, it had grown to $220 billion.

This implies that trade creation outpaced trade diversion. In all, both sides gain when China provides African countries with capital goods and cheap consumer goods, and African countries supply China with the commodities required to fuel its economic expansion.

One can identify several benefits of increased trade with China for Africa.

The emergence of China as an additional trade partner was a key factor behind the high economic growth rates in Africa from the late 1990s to 2014.

Higher Chinese demand for African exports improved terms of trade in the continent, providing the countries with additional financial revenues.

With China as an important trading partner, African countries were provided with an additional market for exports and imports.

It enabled African nations to diversify foreign trade and become less dependent on trade with the US or EU.

The response by African consumers was fairly positive and receptive to the large number of affordable goods imported from China.

China’s imported goods were offered at a lower price and a better quality in comparison to the goods offered by African companies.

China provides fast access to capital and prompt delivery of services and workers. And Chinese loans do not need receiving nations to meet the ethical restrictions that organisations like the IMF require.

Cheap Chinese clothes and cheap Chinese cars at half the price of western ones allow African customers to suddenly raise their purchasing power.

Africa is seen by Chinese businessmen as 900 million potential customers in a fast-growing market, Perhaps, more importantly, African societies are far from market saturation, like their Western counterparts.

Thus, in Africa, China finds not only an ample supply of potential new customers but far less competition from other nations.

In the other direction, China’s growing thirst for raw materials led Chinese state-owned enterprises to the country with natural resources, such as wood and minerals (like those from the Gabonese forests), as time goes by, China became interested in African oil, too.

Over time, African laws adapted to China’s demand, laws intended to force the local transformation of raw materials for export.

This led to a new kind of manufacturing in Africa, managed by the Chinese, with African workers producing exports for Chinese, as well as European, American, and Japanese customers.

African leaders have pursued an increase in the share of raw material transformation both to add value to their exports and to provide manufacturing jobs for local Africans.

China’s oil purchases have raised oil prices, boosting the government revenues of oil exporters like Angola, Gabon, and Nigeria, while hurting the other oil-importing African countries.

At the same time, China’s raw materials purchases have increased prices for copper, timber, and nickel, which benefits many African countries as well.

We can say that Chinese investment in Africa has brought about improvements in infrastructure and economic development in the continent., a decrease in poverty and populations becoming better educated and more politically involved.

The lack of accountability measures and regulatory policies or mechanisms on the African continent has led corrupt actors to hijack many Chinese-funded projects.

In many cases, extraction and infrastructure markets are more concerned with connecting resource markets to China than considering the needs of the African population.

The influx of Chinese entrepreneurs and cheap goods have also decimated domestic industries such as the Nigerian textile markets.

Again, many Chinese investments involve the use of extensive Chinese labour, and this has created problems of local unemployment.

With these very obvious shortcomings of Chinese investment in Africa, there are policy and organisational solutions actively addressing these issues.

The findings of international organisations such as the UN and WHO can influence the state of Chinese business dealings. In particular, the Ease of Doing Business Index and WHO influence provides international awareness and transparency to Chinese investment projects.

Additionally, nations such as Nigeria and South Africa have accepted deals from the United States and the European Union as a way to mediate Chinese diplomatic influence. China, on the other hand, has also sought to improve its image, improving procedural transparency and establishing NGOs throughout Africa.

In whichever way we may want to look at it, we can not deny the fact that Chinese investment in Africa has provided undeniable benefits to the average African.

With concentrated reforms and open diplomatic dialogue, Chinese financial support and trade relations will be instrumental in helping the international community alleviate poverty in Africa.