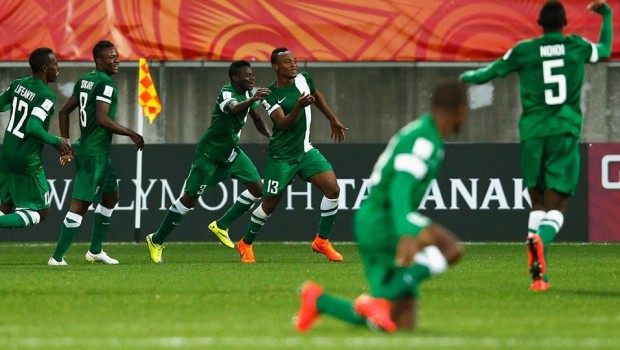 The Nigeria U 20 team, the Flying Eagles, put up an awesome display on Thursday morning as they crushed Korea DPR 4-0 to get their FIFA U20 World Cup campaign back on track after their opening day loss to Brazil.

Though the Koreans where able to hold the Flying Eagles all through the first half, the Coach Manu Garba tutored side turned on style in the second half; scoring four goals against the Asians who were quite compact in the early exchanges before finally crumbling to the superior fire power of the African champions.

Godwin Saviour opened the flood gates of goals as he broke the deadlock for the Nigeria U20 team three minutes into the second half before the Water FC of Abuja midfielder added another three minutes later to put the Flying Eagles on the ascendancy.

In the 71st minute, Enyimba midfielder Kingsley Sokari pulled a thunderbolt from outside the penalty box and his shot could not be stopped by Korea DPR Goal keeper who watched helplessly as he conceded the third goal of the game.

The Flying Eagles were not done with their goals’ feast as substitute Isaac Success put the icing on the cake with his 80th minute goal which happened to be his second in this tournament having also scored in the opening game against Brazil.

Success did combine well with Taiwo Awoniyi to get the goal as the later has played for of a provider than a finisher at the ongoing tournament in New Zealand.

Though with less work to do this time, Nigeria goalkeeper Joshua Enaholo will be proud to have kept a clean sheet after a miserable outing against Brazil where he was blamed for committing howlers which saw the Flying Eagles starting on a losing note.

Nigeria will play her final Group E game on Sunday against Hungary who will be busy against Brazil later today.