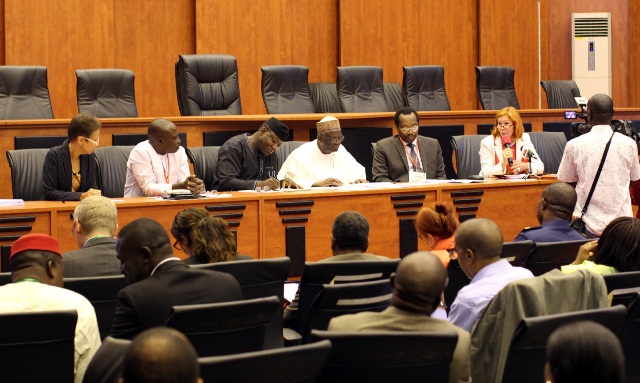 About 70 researchers and policy makers recently gathered in Abuja, Nigeria’s capital  for a two-day policy dialogue on how regional economic communities, like ECOWAS and IGAD, can promote peace in Africa.

The event which has as the Keynote Speaker, Nigeria’s Minister of Mines & Steel Development, Dr. Kayode Fayemi, was organized by the Nordic Africa Institute (NAI), also financed by the Government of Finland, with support from the Institute for Peace .& Conflict Resolution and the African Peace Building Network.

The theme for the 2-day policy dialogue  was, How can regional economic organizations like ECOWAS and IGAD further strengthen their capacity to promote peace in Africa?

Dr. Fayemi in his keynote address, titled: Two And A Half Decades Of  Ecowas’ Peace-Building Interventions In  West Africa:  An Insider-Outsider Perspective’, Maintained That Ecowas, has been complacent. In his words, “In addition to the theoretical disclaimer and my credentials as an ECOWAS ‘Insider-Outsider’, permit me to highlight upfront the core conclusions of my treatise on ECOWAS: Firstly, that while it has made some strides in the field of peace and security, specifically in serving as a good example of how Regional Economic Communities (RECs) can actively engage in peace and security matters, ECOWAS has remained largely stagnant on peace and security for at least a decade and a half, largely because it has remained complacent, comfortable that it remains the foremost regional economic community in Africa today, in comparison to the other RECs. Going forward, the Minister added ” … ECOWAS, as presently structured, in terms of staffing and the commitment of its constituent Member States, is unable to fulfill its core mandate – whether we are referring to the original mandate of May 1975, as contained in the Treaty of Lagos- or its latter mandate contained in its Vision 2020 Strategy Document  where it is said that ECOWAS is “Moving from an ECOWAS of States to an ECOWAS of Citizens”.

Africa’s eight Regional Economic Communities were primarily set up to promote economic integration. Today they play an increasingly important role also in conflict resolution and peace building in countries like Burundi, Liberia, Sierra Leone and elsewhere in Africa.
Professor Victor Adetula,  head of Research at the Nordic Africa Institute, on his part stated that “The performance of traditional organizations like the UN has not been impressive. Also, most of the global powers are now retreating from active engagement outside their immediate geographical locations. In this context regional organizations have become increasingly visible in promoting peace and development”.

“The purpose of this event is to create links. Links between East and West African experiences. Links between research and policy making. Links between lessons learned from prior conflicts to future peacebuilding processes. To achieve this we will look from within and gather African scholars to exchange ideas on how we deal with conflict resolution in different African contexts“, said Professor Oshita Oshita, Director General of IPCR, who are also part of the organizers of the dialogue

This unique gathering which hosted about a hundred  participants extensively engaged in he policy dialogue. It included an opening session, 5-6 plenary sessions, and a concluding session which focused on key recommendations and way forward for the regional economic communities  in their mandates.  The Policy Dialogue is arranged by the Nordic Africa Institute in collaboration with the Institute for Peace and Conflict Resolution (IPCR) in Abuja, the Social Science Research Council-Africa Peace building Network (SSRC-APN) and in partnership with ECOWAS and IGAD.. .
The Institute for Peace and Conflict Resolution (IPCR) is a research centre, a think-tank and an agency to strengthen Nigeria’s capacity for the promotion of peace and conflict prevention, management and resolution. www.ipcr.gov.ng
The Nordic Africa Institute (NAI) is a center for research, documentation and information on Africa. It is based in Uppsala, Sweden, and jointly financed by the governments of Finland, Iceland and Sweden. www.nai.uu.se
The African Peacebuilding Network (APN) is a part of the US-based non-profit Social Science Research Council (SSRC). APN’s mission is to support independent African research on peacebuilding and its integration into regional and global policy.
The Economic Community of West African States (ECOWAS) is a regional economic community. Member countries are Benin, Burkina Faso, Cape Verde, Cote d’ Ivoire, The Gambia, Ghana, Guinea, Guinea Bissau, Liberia, Mali, Niger, Nigeria, Sierra Leone, Senegal and Togo.