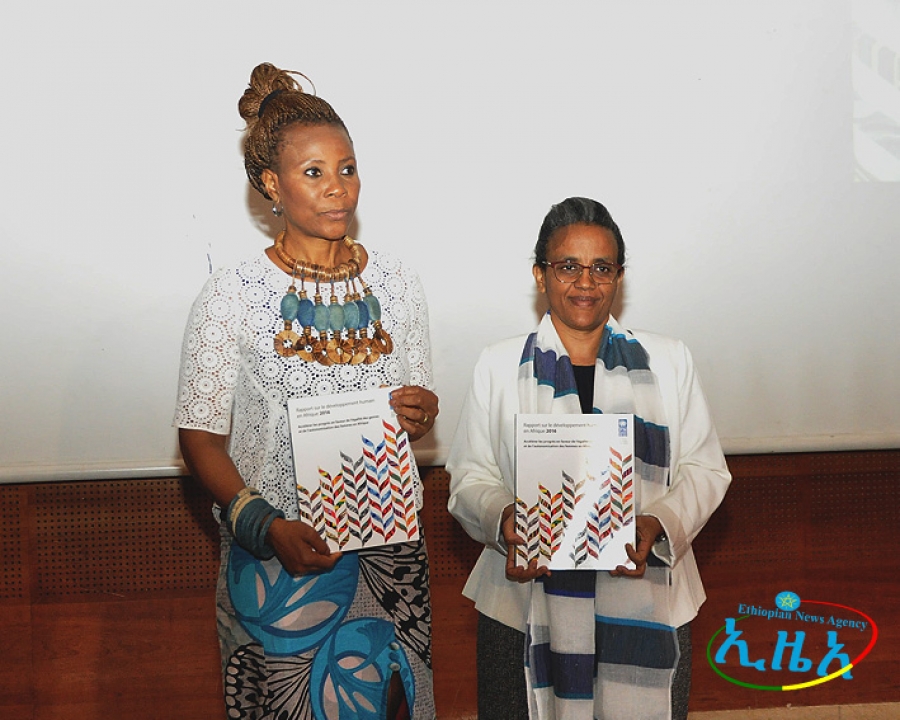 First Lady Roman Tesfaye has commended what she called remarkable achievements on socio-economic and political empowerment of women in Ethiopia in recent years.

Delivering speech at the launching of the African Human Development Report 2016 here today, the First Lady pointed out government attention given to organizing women under various income-generating associations in the first phase of the five years development plan.

According to Roman, the first GTP made significant strides in ensuring the property ownership of women with over 11 million women issued with land use right certificates during the period.

She said “successive medium term development plans in the past have identified gender equality and women empowerment as one of their key pillars.”

This has resulted in the creation of jobs, and business opportunities in different economic sectors, making millions of women beneficiaries of better economic status, Roman said.

The First Lady urged that “while celebrating this progress, it is also important to further scrutinize the enforcement of the relevant laws to ensure that women enjoy all benefits that are enshrined in our Constitution.”

Ethiopia is also making alternative energy relevant technologies as well as other basic service accessible to women in order to alleviate their workload.

Encouraging gains have been reported in enabling women get access to social services such as education, social protection, and health; particularly reproductive and maternal health.

Roman said access to better credit and saving service to women are the other areas with encouraging results from the GTP-1 period, with the proportion of women membership in the House of People’s Representatives (HPR) also reaching 38 per cent presently.

“Whether we like it or not the social and economic transformation we aspire to achieve and the world we want to see by 2030 cannot be reached without empowering women,” Roman underlined.

Despite the reported significant progress, major challenges such as weak associations, low representation of women in leadership posts and harmful traditions are cited as areas of challenges that need due attention.

The intersection between social, political and economic dimensions in analyzing gender issues in Africa certainly contributes to sustainable human progress and is in conformity with the aspiration of Agenda 2063 and the global 2030 agenda on SDGs, Ahunna Eziakonwa, UNDP Resident Representative stated.

According to the 2016 report, Ethiopia, United Republic of Tanzania, Burundi, Mali, Zambia, Niger, Angola, Sierra Leone, Mozambique and Rwanda have made the largest gain in human development since 2000.

The report indicated that on average, countries with initially low levels of human development grew faster, thus making large gains, until 2010 when this growth began to slow down.