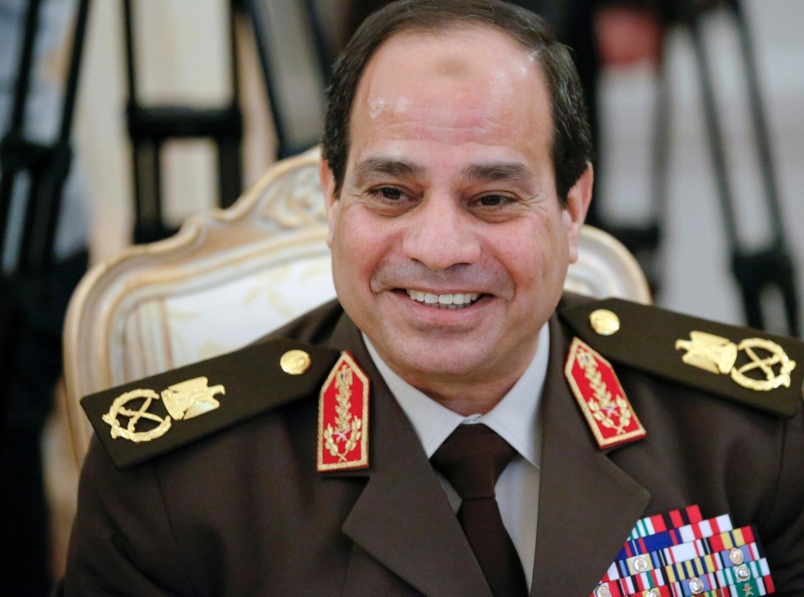 Former Egyptian army chief Abdel Fattah al-Sisi won a landslide victory in a presidential election on Thursday but a low turnout threatened to deprive him of the strong mandate he needs to fix the economy and face down an Islamist insurgency.

But a lower-than-expected turnout figure raised questions about the credibility of a man idolized by his supporters as a hero who can deliver stability.

The stakes are high for Sisi in a country where street protests have helped topple two presidents in three years.

Since a series of television interviews he gave ahead of the vote, many Egyptians feel Sisi has not spelled out a clear vision of how he would tackle Egypt’s problems, instead making a general call for people to work hard and be patient.

He has presented vague plans to remedy the economy, suffering from corruption, high unemployment, and a widening budget deficit aggravated by fuel subsidies that could cost nearly $19 billion in the next fiscal year.

“All in all the weak turnout will make it harder for Sisi to impose painful economic reforms that international institutions and investors are demanding,” said Anna Boyd, an analyst at London-based IHS Jane’s.

Investors want Sisi to end energy subsidies, impose a clear tax regime and give guidance on the direction of the exchange rate.

Turnout was about 46 percent of Egypt’s 54 million voters, the government said, less than the 40 million votes, or 80 percent of the electorate, that Sisi had called for last week.

It was also less than the 52 percent turnout secured in the 2012 presidential election by Mohamed Mursi, the Islamist leader Sisi ousted last year after mass protests against his rule.

A Reuters tour of polling stations suggested turnout was low. Many Egyptians said voters had stayed at home due to political apathy, opposition to another military man becoming president, discontent at suppression of freedoms among liberal youth, and calls for a boycott by Islamists.

“These elections were just an act, a farce,” said Mahmoud Ibrahim, 25, a resident of the sprawling Imbaba district who did not vote. “Turnout was low, but the media will lie to the people, all for the sake of the one man.”

Sabahi conceded defeat but rejected the official turnout figures as too high, calling them “an insult to the intelligence of Egyptians.”

The stock market .EGX30, which fell 2.3 percent on Wednesday as some players said the turnout was a disappointment, closed down 3.45 percent on Thursday, after the financeminister approved a ten percent tax on stock market profits. On the black market, the Egyptian pound weakened slightly. (Full Story)

Mohamed El Sewedy, chairman of the Federation of Egyptian Industries, said, however: “The business community is very happy about the results. We need real reform and opportunities … a guy with courage to take decisions.”

Sisi is seen by supporters as a strong figure who can end the turmoil that has convulsedEgypt for three years since the revolution that ousted Hosni Mubarak after 30 years in power.

Critics fear Sisi will be another autocrat who will preserve the army’s interests, quash hopes of democracy and mismanage the economy.

Sisi enjoys the backing of the armed forces and the Interior Ministry, as well as businessmen who thrived under Mubarak and are still highly influential.

Sisi also has the support of Saudi Arabia, the United Arab Emirates and Kuwait, which see Mursi’s Muslim Brotherhood as an existential threat. Gulf Arab states pumped billions of dollars into Egypt to keep the economy afloat.

“Egypt and Saudi Arabia can work together to face threats, either internally like the Muslim Brotherhood, or externally like Iran and its supporters in the area,” said Mohammed Zulfa, a member of Saudi Arabia’s Shura Council, an appointed body that advises the government.

“I think the Saudis will do all they can to support Sisi now he has been elected as he was supported by the Egyptian people,” he added.

Diplomats said Saudi Arabia was committed to help Sisi overcome Egypt’s crisis by maintaining financial aid to help him shore up an economy shunned by tourists and investors.

Saudi Arabia has also formally designated the Muslim Brotherhood as a terrorist organization, in a move that increased pressure on Qatar, whose backing for the group has sparked a row with Gulf monarchies.

Riyadh fears the Brotherhood, whose Sunni Islamist doctrines challenge the Saudi principle of dynastic rule, has tried to build support inside the kingdom since the Arab revolutions.

Sisi gained adulation from many Egyptians after deposing Mursi, whose one year in office was marred by allegations that he usurped power and mismanaged the economy.

But the lower-than-expected turnout suggest Sisi may not have the popular mandate to take the tough measures needed to restore healthy economic growth, ease poverty and unemployment, and end costly energy subsidies.

“The hard work starts here. The last 12 months have been about not being Mursi. Now the new regime has to deliver,” said Simon Williams, chief economist at HSBC Middle East.

One of Sisi’s biggest tests will be the politically-sensitive issue of energy subsidies which drain billions of dollars from the state budget every year. Businessmen have urged Sisi to raise energy prices even though that may trigger protests, or risk sinking the economy.

Tamer Abu Bakr, chairman of Mashreq Petroleum, predicted Sisi would put off any bold decisions in the first few months of his presidency, but a move was inevitable.

Sisi also faces the formidable task of crushing an Islamist armed insurgency and eliminating any threat from the Brotherhood, which, as the country’s best-organized political force, had won every national vote held after Mubarak’s fall.

Islamist militants in the Sinai have stepped up attacks since Mursi’s ouster, killing hundreds of police and soldiers in violence that has hammered the vital tourism industry.

The Brotherhood, a movement loyal to Mursi and outlawed as a terrorist group, has rejected the election, describing it as an extension of the army takeover.

The Brotherhood, believed to have about one million members, has been devastated by one of the toughest crackdowns in its history. Its top leaders, including Mursi, are on trial and could face the death penalty. The movement seemed inspired by the low turnout in this week’s poll.

“Sisi and those with him have to admit that Egypt is against them and the Dr. Mohamed Mursi is their president and the president of all Egyptians,” an Islamist alliance that includes the Brotherhood said in a statement.

The United States, Egypt’s ally in the West, has yet to comment on Sisi’s victory