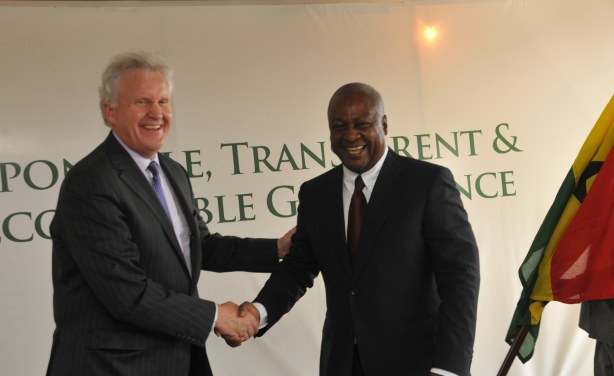 General Electric (GE), Global Chairman and CEO Jeff Immelt says the global infrastructure giant is making good on its commitment to improve Ghana’s Energy and Healthcare sectors. The GE Chief Executive said this at Flagstaff House in Accra when he paid a courtesy call to President John Mahama.

The meeting was a follow up from the US-Africa Leaders’ Summit in Washington D.C. in August 2014 where GE revealed its vision to make Ghana a major hub for its power business in Africa, and a key driver of its ventures in oil and gas and healthcare. Jeff Immelt restated GE’s commitment to the implementation of the “Ghana 1000” project which is expected to be commissioned in the third quarter of 2016. President Mahama thanked GE for the significant investments in critical sectors of the Ghanaian economy. He said Government’s commitment to continue to create the enabling environment that will make Ghana the preferred destination for investment in Africa.

The Ghana 1000 power project, initiated by GE in conjunction with Endeavor Energy, Eranove (formerly Finagestion), Sage Petroleum and the Ghanaian government, will create what would be Sub Saharan Africa’s largest integrated gas to power project and will substantially lower the cost of electricity while increasing reliability. The project will comprise a Floating Storage Regasification Unit vessel to supply gas to the power plant, the first of its kind in Africa.

GE Ghana CEO Mr. Leslie Nelson disclosed that GE’s footprint in Ghana cuts across critical sectors including Healthcare, Power and Oil and Gas. Apart from capacity building efforts in the Oil and Gas space, the GE Ghana leader disclosed that GE had identified over 100 districts that would receive portable ultrasound equipment and offer training to 1000 midwives in the country.

GE is the world’s leading technology and financial services company, with over $140 billion in annual revenue. In Ghana GE operates in the Power & Water, Oil &Gas and Healthcare businesses and has grown its operations by more than five-fold since 2010.