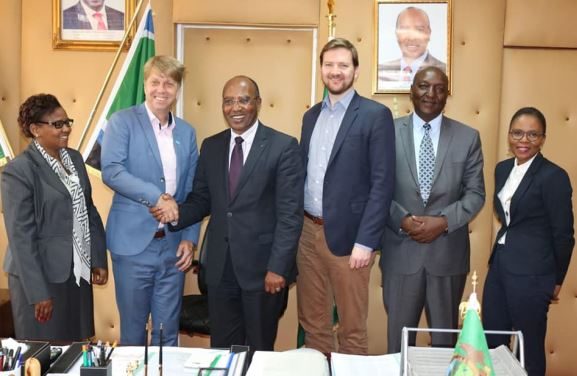 The officials of BASF, one of the world’s leading chemical companies in the world visited Nyandarua Governor, Francis Kimemia in his Ol Kalou office where they pledged to support the project estimated to cost over Sh500 million. The county and the company are set to sign a memorandum of Understanding in April this year.

According to BASF Vice President for Africa Michael Gotsche, the construction work and its associated projects will commence by October this year. “Through BASF’s Performance Material Solutions, Nyandarua farmers will be able to store their produce under hygienic and optimum storage conditions in packhouse facilities currently being developed,” he said.

He noted that a technical committee whose activities would be coordinated by Kenya Investment Authority had been formed to see to it that the project run smoothly. Governor Kimemia hailed the new development saying that the project would go a long way in making sure that potato produce does not go to waste as per the case right now. He said that farmers have been forced to incur losses worth millions of shillings due to lack of pack houses.He noted that the county government had taken an initiative to also put up a potato processing plant in Kinangop with the partnership of the national government.

“Already, we have set aside Sh400 million this financial year to start a processing plant in Kinangop and the project is set to commence in April this year. This will go a long way in ensuring that we add value to our products before reaching the main market,” said the Governor.

He said the country has a potential of growing more potatoes but added that proper planning was necessary. He noted that there was an emerging trend of people subdividing farmland to venture into real estates, saying this will greatly affect food production across the country.