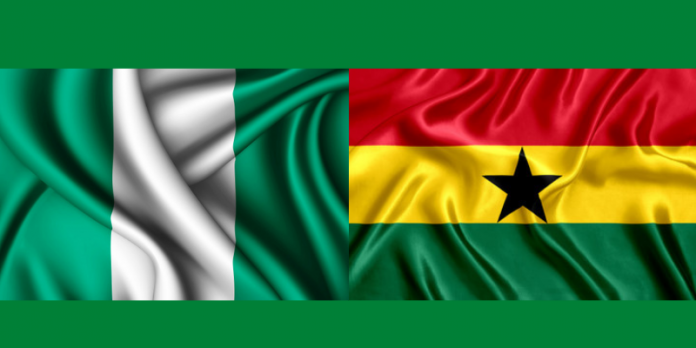 The daily bustle of shoppers on Accra’s busy Oxford Street point to a country on the rise – but all that is about to dwarfed by the buzz of Africa’s new free trade deal which launches in the Ghanaian capital in January.

The African Continental Free Trade Area (AfCFTA) will create a single market of more than a billion Africans across fifty-three countries, and it will be headquartered in Accra. This will place Ghana at the heart of a pan-African economy worth in excess of three trillion dollars.

In addition, Ghana and its President Nana Akufo-Addo have just taken over the Chair of the West African economic community ECOWAS the fifteen-members regional group of countries traditionally dominated by Nigeria.

So is Ghana poised to reinforce its role as a major actor on the continent?

When President Kwame Nkrumah led Ghana to be the first African state to gain independence in 1957 he declared at his inauguration:

“Our independence is meaningless unless it is linked up with the total liberation of Africa.”

Sixty-three years on the question now is  Ghana about to fulfil his ambition and lead the continent into a new era of economic liberation?

The key lies in boosting intra-Africa trade. That currently stands at a low figure of around 16%. According to the UN Economic Commission for Africa, this ought to grow to 52% within two years of the AfCFTA is implemented.

Ghana is certainly trying hard to play a pivotal role in this expansion. Its government has an aggressively pro-business agenda. It is currently spending heavily on infrastructure and seeking to industrialize its rural areas with the support of the Business Advisory and Resource Centre.

Ghana’s main ports of Tema and Takoradi are being upgraded in a bid to make them the maritime hubs for West Africa, and the government insists that 70% of production in its Economic Free Zones have to be exported.

The AfCFTA has been delayed by six months due to the devastating impact of the Covid-19 pandemic across Africa and through the rest of the globe. It will now be launched in Accra in January 2021.

Going into the global pandemic, Ghana was in quite good economic shape. Last year by IMF predicted a GDP Growth Rate of 8.8%, making Ghana the fastest growing economy in the world.

The discovery of oil has helped, but other sectors like agriculture, manufacturing and services have also been on the rise as Ghana has sought to diversify. The National Employment Innovation Plan has supported 7,000 start-ups and SMEs.

Agriculture, where cocoa and cocoa-related products still make up 50% of Ghana’s exports, remains a key sector. It has benefited enormously by embracing modern farming techniques. With government support, some 200,000 farmers received improved seeds and fertilizers, and this has boosted yields.

But if Ghana is to be considered an African success story, then education has to be at the heart of that success.

The Free Senior High School Education policy has ensured that some 54% of young people receive secondary school education. The country spends 8.2% of its GDP on education, more than the East and West Africa giants Kenya and Nigeria.

At university level South Africa, Egypt and Nigeria still lead the way with several institutions in the Top 500 of Global rankings, but new universities like Patrick Awuah’s Ashesi University are starting to make an impact.

Ashesi was founded just over twenty years ago and is fast establishing a reputation as a leading African institution. Interestingly it prides itself on having achieved a 50:50 gender balance of students in a traditionally male-dominated tertiary education sector.

In a similar way, the Ghanaian entrepreneur Tom Ilube founded the African Science Academy, Africa’s first school for girls who want to learn the STEM subjects of science, technology, engineering and mathematics. Tom is the CEO of the leading technology company Crossword Cybersecurity, and he set up the Academy to recognize the importance of getting young women into technology.

In 2017 he was named the UK’s most influential person of Afro-Caribbean descent and is part of a growing diaspora dedicated to sharing their knowledge and skills to re-engage with Africa and re-energize sectors of the economy like education and technology.

Charlette N’Guessan is another young African who’s blazing a trail for this tech revolution. Charlette recently won the Royal Academy for Engineering Africa Prize for Engineering Innovation. She’s an Ivorian who now works in Accra where she’s a co-founder of the BACE Group.

She has a degree in Electronic and Software Engineering and is now studying Data Science and Machine learning. She won for designing a facial recognition tech system to verify identities and to protect people from financial and online identity fraud.  This year she co-authored a book on Artificial Intelligence entitled the AI Book.

This Tech revolution is endorsed by Ghanaian innovators like Akosua Annobil, who is the founder of AB2020, which promotes and connects African entrepreneurs and investment communities. Akosua is also the founder of the annual Tech In Ghana forum for which she was named one of the top 100 most influential leaders in the UK Tech sector by the Financial Times.

Akosua is typical of so-called “second generation” Ghanaians who are born outside Ghana but are committed to the land of their parents. Akosua was born and raised in London and graduated from the University of the Arts in London before entering her chosen career as a journalist and communications and public relations specialist.

She was part of a Ghanaian diaspora in the UK that, in the words of Future Of Ghana chair Arnold Sarfo-Kantankia, “seeks to galvanize support from the second generation to harness our collective skills, talents and resources to move to Ghana”.

Some 84% of Arnold’s Future Of Ghana members say they intend to relocate to Ghana at some point in their lives.  Akosua is a prime example of this desire.

When she launched AB2020, she designed it as a platform to bring together companies seeking to invest in Ghana with Ghanaian start-ups and entrepreneurs. From her base in London, she organized investment tours and trade missions to take potential UK investors to Ghana. Meanwhile, her Tech In Ghana became an annual showcase to bring together investors and entrepreneurs.

Akosua finally realized that she couldn’t do this work from the UK. If she was going to keep on top of all the innovations taking place in Ghana, she realized that she would have to relocate her business onto the African continent. Now she is living in Accra where she’s running a vibrant business and playing a central role of supporting Ghana’s Tech Incubators.

Globally the Africa diaspora delivers some $2 billion a year in remittances. Now it seems sending money home is not enough. Young people want to engage with the continent more fully. People like the US journalist John Fountain who has just won a Roosevelt Scholarship to teach at the University of Ghana while conducting research into his academic project entitled “Africa Calling: Portraits of Black Americans Drawn To The Motherland”.

Fountain, a former New York Times correspondent and staff writer at the Washington Post and Chicago Tribune, intends to explore the reasons for the recently increased migration of African Americans to West Africa and Ghana in particular:

“This is an absolutely incredible opportunity to teach and also learn from the African-American black folk who now call this West African nation home while being fully immersed in the culture of Ghana to which I feel a deep ancestral connection”.

Like Akosua, he’s part of this growing return that can only bring new skills and opportunities to Africa. There’s also, as in Akosua’s case, the lure of being part of a vibrant young economy.

Youth unemployment in Ghana is under ten per cent at 9.1% as opposed to 14% in Nigeria and a massive 55% in South Africa. Undoubtedly the Covid-19 has had a negative impact on all three economies in common with the rest of the world, but it’s equally clear that those countries with a better-educated youth population stand a better chance of rebuilding their countries’ economies.

Young people like Francisca Oteng-Mensah is often cited as a symbol of this new generation. She’s now 27 years old and was first elected to Ghana’s Parliament at the age of 23. She’s also Chair of the National Youth Authority which attempts to tackle youth unemployment with training programmes ranging from farming and digital marketing to beauty products and dress-making.

According to the Minister of Employment and Labour Relations Mr Ignatius Baffor Awuah unemployment in Ghana has actually fallen by some 3.5% during the Covid-19 pandemic. For those workers who do lose their jobs, a scheme is under discussion to provide direct income support. The National Unemployment Insurance Scheme will also offer opportunities for re-training and the provision of apprenticeships and internships.

So does this lively tech sector, low youth unemployment along with ECOWAS leadership with Accra the designated HQ for the AfCTFA make Ghana a challenger to Nigeria for regional leadership?

There’s always been a traditional rivalry between Ghana and Nigeria to claim that title. Recently this has spilt over into battles over trade and claims that Nigerians living in Ghana have been harassed and had their shops forcibly closed.

According to the Ghanaian Times, last month, more than fifty shops owned by Nigerians and other nationalities were closed down for operating without the necessary permissions.

Nigeria’s Information Minister Lai Mohammed claimed that Nigerians in Ghana were being treated as “objects of ridicule”, and the matter was so serious that the Speaker of Nigeria’s parliament travelled to Accra for four days of crisis talks. He concluded that the issue was a misunderstanding, but it underlined the tensions between both countries.

Relations were not improved when it a Ghanaian food company decided to settle a long-standing argument regarding which country cooked the better Jollof rice.

After an extensive tasting session, all three judges ruled unanimously in favour of Ghana’s Jollof rice, much to Nigeria’s despair.

Jollof rice is known to be a matter of great pride in West Africa, but for all of Ghana’s culinary successes, the fact remains that Nigeria owns the biggest share of the African pie.

Nigeria has a population of 206 million as opposed to Ghana’s 31 million. By 2050 the UN estimates that there will be 400 million Nigerians and it will overtake the US as the third most populous country in the world after China and India.

Already Nigeria accounts for around 17% of Africa’s total GDP. Its economy is at least ten times bigger than Ghana’s economy. Ghana may be attracting a lot of interest, but Nigeria is still the biggest star in the West Africa sky.

The final word is perhaps best articulated by the legendary Ghanaian writer and BBC journalist Elizabeth Ohene.  She relates how she grew up in Ghana alongside lots of Nigerians and is fully aware of these rivalries. However, she concludes:

Come January and the launch of the African Continental Free Trade Agreement, both Ghana and Nigeria are going to need all their tongues to speak together about Africa’s new opportunities. And all their teeth to chew the expected economic growth that the continent expects.

Peter Burdin is a veteran journalist, with over three decades of industry experience working with some of the world’s leading media groups, including the BBC. He is the Chairman of the African Leadership Magazine Editorial Board