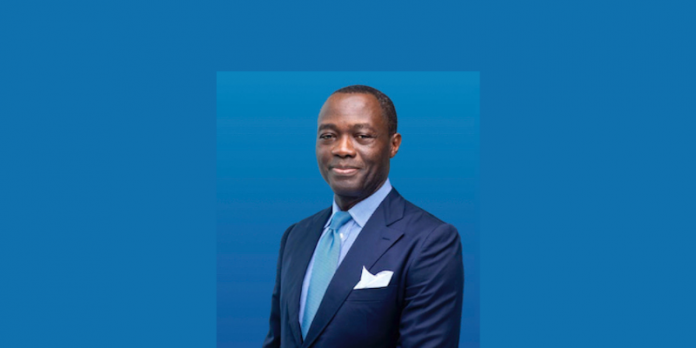 Ecobank has a new chairman, Mr Alain Nkontchou. He talked to ALM about the challenges of heading the leading pan-African bank.  Stephen Williams reports

Ecobank Transnational Incorporated (“ETI”), the parent of the Ecobank Group (the leading pan-African bank with banking operations in 33 countries), concluded its 32nd Annual General Meeting in Lagos at the end of last June by appointing Alain Nkontchou as its new non-executive Chairman.

Nkontchou takes over the role and responsibilities of the Chairman of Ecobank Transnational Incorporated (ETI), the parent company of Ecobank, from Nigeria’s Emmanuel Ikazoboh, whose six-year tenure as Chairman of Ecobank’s holding company came to an end earlier this year.

Nkontchou has been a non-executive director of Ecobank since 2015 and is Managing Partner of the African-focused, London and Johannesburg headquartered asset management company, Enko Capital Management.

It is a role that Alain Nkontchou has embraced with enthusiasm. While insisting that he is a non-executive Chairman, he defines his role as being in his own words, to “ensure that the Board is effective in its task of setting and implementing the company’s direction, and providing strong strategic oversight. Challenging management’s thinking and proposals to ensure clear decisions are made and implemented”.

That statement makes clear that Nkontchou believes that his role as Chairman is not simply titular but is active in promoting the highest standard of corporate governance.

“Holding the global chief executive (Ade Ayeyemi) and the executive team accountable for the execution and delivery of agreed plans and key strategic goals [is a primary concern],” he says.

However, there are also other important roles for the Chairman, including –  ensuring effective, regular communication with shareholders. And that their views are communicated to the Board as a whole.

There is also, of course, the need to foster high level regulatory and political relationships, thereby preserving ETI’s influence and licence to operate.

For Ecobank, that brings its own particular challenges as the bank operates in 33 countries and jurisdictions.

When asked about this complexity, Nkontchou points to his reliance on the bank’s long legacy of working with pan-African principles.

Yet a combination of circumstances has thrown up social and economic challenges, unlike anything that has gone before. Not only does an increasingly vitriolic spat between China and the US threaten the structure of global trade, there is a continuing slump in. commodity prices.

There is also the fact that Africa is facing the full impact of the Covid-19 pandemic. But Nkontchou demonstrates confidence in Africa and a determination that ETI will persevere with playing its part in overcoming these critical problems.

He says: “As a pan-African bank we have an absolute responsibility to support Africa’s economic recovery post-COVID-19 and will not shirk from this duty. Ecobank is well-positioned to support the transition.

“We have an intense focus on supporting MSMEs. The range of measures to support MSMEs demonstrates our intent, as they are the backbone of African economies; they generate employment and drive economic development. Our collaboration AUDA, the development agency of the African Union, is key, coordinating and executing priority regional and continental development projects to promote regional integration towards the accelerated realization of Agenda 2063 – Africa’s vision and action plan.

“Covid-19 has led to the realization that reliance upon a single supply chain is undesirable. This will boost national and regional supply chain diversification – playing to Africa’s advantage and boosted by Africa Continental Free Trade Agreement (AfCFTA) – and Ecobank will be supporting the transition.”

And on the subject of AfCFTA, he says that the bank will be fostering the building of strategic partnerships to provide enhanced solutions, delivery and reach.

It is a continuation of Ecobank’s current strategy of using data and digital technologies to better serve mass-market businesses. As Nkontchou puts it: “Broadband is as important as building roads”.

It is clear that Ecobank’s footprint puts the bank in a unique position. It can help sub-Saharan Africa seize the opportunities that AfCFTA will offer to trade and investment through its creation of a very large consumer market of over 1.3 billion people across the entire continent.

Ecobank, with operations in 33 African countries, has the ability to provide the financial ecosystem of AfCFTA.

“The opportunities from AfCFTA are immense for Africa, in terms of productivity gains and further economic integration across the continent, its people, its businesses, its countries and for Ecobank.”

AfCFTA will also provide a safety valve effectively providing Africa with intra-African trading opportunities that will shield it from exogenous global trade tensions.

It is obvious that he is fully behind Ecobank’s determination to better lives in Africa. One of the bank’s most recent major initiatives has been its “Zero Malaria Business Leadership” programme, launched with the collaboration of Speak Up Africa. The aim is, as its name suggests, eradicating malaria.

The programme, implemented in 30 African countries, will push decision-makers to increase financing and take stronger and better-targeted actions to mobilize funds at the national level to sustainably finance malaria control.

Nkontchou is clearly anticipating a new era for Ecobank to take the continent forward, working closely with the group chief executive and the Board of directors to meet current challenges and future opportunities.