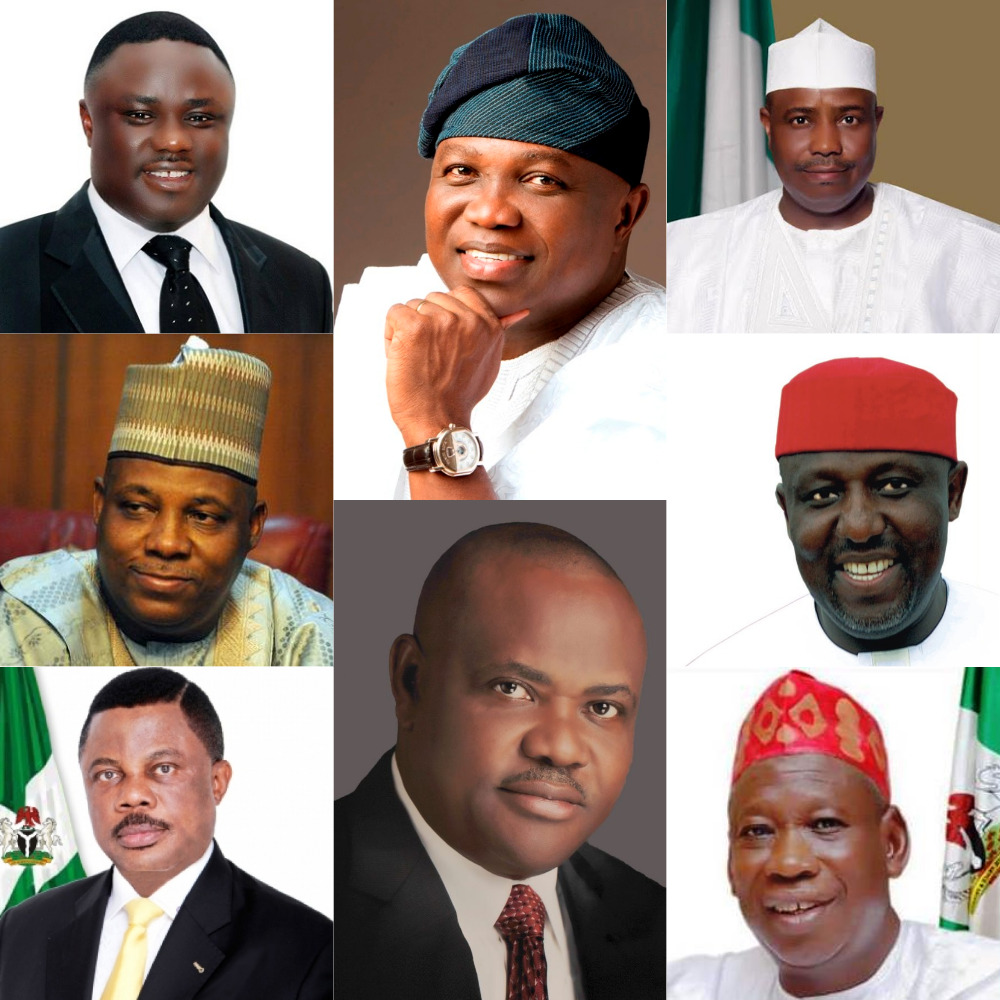 The African Leadership Magazine today announced a list of 8 nominees for the States Good Governance Poll 2017, which will open for voting on Monday for the Best Performing Nigerian Governor in 2017.
The Poll is a strategic engagement tool designed to rate the performances of Nigerian State Governors, in line with the Magazine’s mandate of providing credible information, celebrating exemplary leadership, outstanding performance, and ingenuous strides, that have fostered greater socio-economic development in Nigeria, thereby improving the quality of lives of the people, over a period of one year.
The nominees are: Akinwunmi Ambode, Governor of Lagos State; Umar Ganduje, Governor of Kano State; Willie Obiano, Governor of Anambra State; Nyesom Wike, Governor of Rivers State; Aminu Tambuwal, Governor of Sokoto State; Rochas Okorocha, Governor of Imo State; Kashim Shettima, Governor of Borno State; and Ben Ayade, Governor of Cross Rivers State.
Dr. Ken Giami, the publisher of the magazine, while announcing the nominees said that selection of the Governors was based on their performance in four (4) core criteria- Security, Economy, Infrastructure, and Accountability.
“…Our Advisory Board took into consideration the efforts of the Governors to maintain peace and security in their respective states, amidst agitations from different parts of the country, terrorist threats, and the worrisome criminal situation in the country, largely due to the level of unemployment, influx of arms, corruption and narcotics in the country.
“We also looked at the Governors’ ingenuous efforts and strides in diversifying the economy of their states, resulting to job creation and economic growth, investing in the development of health, educational, road, and housing infrastructures in the state, and a commitment to transparency and accountability in running the affairs of the states”, Dr. Giami noted.
The Magazine’s Good Governance Poll was launched in 2016 with the aim of promoting good governance and engendering healthy competition between Nigerian governors towards delivering the dividends of democracy to their people. The 2016 inaugural winner was Akinwunmi Ambode, Governor of Lagos State, who received the special award at the Iconic St. Regis Hotel New York, on the margin of the 2016 United Nations General Assembly, presented by His Excellency Peter Mutharika, President of the Republic of Malawi.
The winner of the 2017 poll will be also conferred with the African Leadership Excellence Award and decorated with the Best Performing Nigerian Governor Medal, during the Magazine’s International Conference on African Leadership, billed to hold on September 21st, at the margins of the United Nations 72nd General Assembly, New York 2017.  The First Runner-up will also receive a commendation award in New York.
The poll will run for duration of 2 weeks on the magazine’s website- www.africanleadershoip.co.uk.
The African Leadership magazine focuses on bringing the best of Africa to a global audience, telling the African story from an African perspective; while evolving solutions to peculiar challenges being faced by the continent today. Since its maiden edition, African Leadership Magazine has grown to become a leading Pan-African flagship leadership-focused publication read by over 1,000, 000 Africans weekly, and targeted international investors, business executives, government policy makers and multilateral agencies across Africa, the Middle East and Asia, Europe and the U.A.S.
For media inquiries:
Email- editor@www.africanleadershipmagazine.co.uk
Call- +23480 61197781