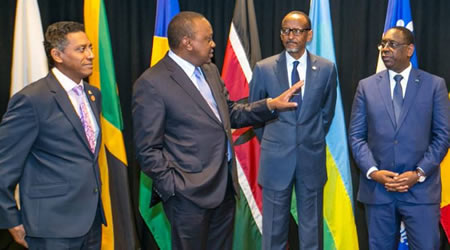 Some African leaders which include Danny Faure of Seychelles, Macky Sall of Senegal, Uhuru Kenyatta of Kenya, Paul Kagame of Rwanda and South Africa‘s Cyril Ramaphose represented their countries at the G7 Summit in Quebec, Canada. The G7 Summit focused on economic growth, climate change and security.

Regarding Africa, the following was written in the communiqué issued at the end of the G7 2018 meetings:

“Africa’s security, stability, and sustainable development are high priorities for us, and we reiterate our support for African-led initiatives, including at a regional level. We reiterate our commitment to work in partnership with the African continent, supporting the African Union Agenda 2063, to realize Africa’s potential. We will promote African capabilities to better prevent, respond to, and manage crisis and conflicts and to strengthen democratic institutions. We reiterate our commitment to the stabilization, unity and democracy of Libya, which is key for the stability of the Mediterranean region and of Europe. We support the efforts of the Special Representative of the UNSG Salam in pursuing an inclusive political process founded on his Action Plan and we encourage all Libyan and regional actors to uphold their constructive engagement as outlined in the June 2018 UNSC Presidential statement. We support the efforts of the Presidency Council and the GNA to consolidate State institutions.”

After series of meetings at the G7 Summit, some new developments were made. These include: