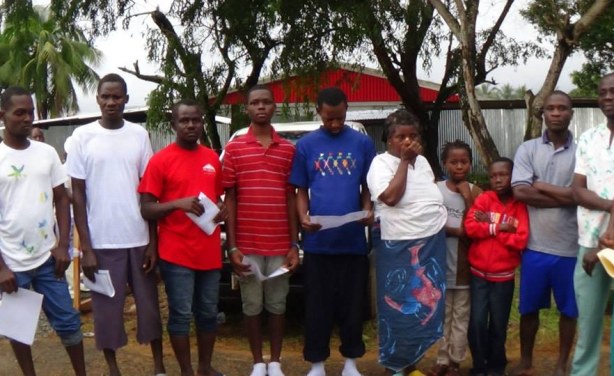 Ebola is known to Liberians as the end of life as those infested with the deadly virus see infection as the end of the journey on earth and for this reason denial about the existence of the virus is high as people do not want to be pronounced as being positive since it eventually means death.

While the Ministry of Health and Social Welfare is creating awareness, informing people that early treatment can lead to survival, the statistics regarding the fatality rate of the virus standing at over 90% continues to create fear and people showing symptoms in most instances deny having the virus until death.

Ebola in Liberia has come with stigma where family members of those who die of the virus are also seen in the eyes of the public as facing the risk of carrying the virus waiting for their demise like their dead family member.

People are fearing going to hospital in order not be diagnosed with the virus, as they prefer buying drugs from pharmacies to treat themselves with the feeling that being tested Ebola positive mean automatic death. Denial and fear have been seen as two of the major reasons for the rapid spread of the virus across Liberia and people taken into isolation centers are perceived to not have the opportunity to return to their communities any longer.

Patrick Sawyer, whose travel to Nigeria led to high international attention about the virus in Liberia, from a statement released by his wife, Decontee Sawyer point to the fact that he too was perhaps involved in high denial and wanted to leave Liberia to go to a place where he could seek better medical care.

“He didn’t tell me this, but I know in my heart of hearts that Patrick was determined to get to Nigeria by all means because he felt that Nigeria would be a place of refuge. He has expressed to me many times in the past that he felt passionately about helping to be a part of strengthening the Liberia’s healthcare system, but he knew it wasn’t there yet, and he wouldn’t want to take a chance with his life because a lot of people depended on him…”

“Patrick had a passion for life, and he wouldn’t have wanted his to end. So, I bet anything that he was thinking, if I could only get to Nigeria, a way more developed country than Liberia, I would be able to get some help. How ironic”, Decontee expressed.

In the wave of the increase in the deaths, suspected and confirmed cases of the virus in Liberia, the fight against the virus has seen a hope in despair in less than a week with at least 14 survivors, two Americans and 12 Liberians.

On Tuesday, U.S. aid worker Nancy Writebol was discharged from Emory University Hospital in Atlanta after recovering from Ebola and testing clear of the virus, missionary group Samaritan Purse said. Writebol left the hospital on Tuesday, August 19 and has since joined her husband David at an undisclosed location to rest, the group said.

She has now been followed by her fellow American Doctor, Kent Brantly who also got infested with the virus while working in Liberia and was Thursday released from the same hospital where Nancy underwent treatment.

“God saved my life,” said Brantly, looking gaunt, at a press conference Thursday, at which the room applauded his appearance. He thanked his medical team and the millions of people around the world praying for his recovery. “Please do not stop praying for the people of West Africa.”

Bruce Ribner, medical director of the hospital’s infectious disease unit, said Brantly will go to an undisclosed location with his wife and children after the press conference. Brantly and Writebol, a volunteer with SIM USA, were flown to Emory from Liberia and were treated in the hospital’s specialized unit.

Ribner said the hospital performed extensive blood and urine tests on both patients and consulted with the Centers for Disease Control and Prevention before deciding the two missionaries were ready to be released. Neither pose any risk to the public, he said.

“After a rigorous course of treatment and testing, the Emory healthcare team has determined that both patients have recovered from the Ebola virus and can return to their families and community without concern for spreading this infection to others,” Ribner said.

“We are profoundly grateful for the opportunity to have applied our training, our care and our experience to meet their needs. All of us who have worked with them have been impressed by their courage and determination.”

Writebol chose not to make a statement. However, Brantly related that, as she left her isolation unit, she said, “To God be the glory.” Ribner said he hopes what he and his colleagues learned about treating Ebola can help save other patients in Africa.

Both Brantly and Writebol received doses of an experimental drug, called Zmapp, which includes man-made antibodies against Ebola. Although Zmapp has shown promise in animals, it has not yet been tested in humans. Experts have said it’s not possible to conclude that Zmapp cured their disease, although getting good supportive care at Emory, one of the world’s best hospitals, likely improved their chances of survival.

Samaritan’s Purse, the Christian humanitarian organization for which Brantly works, released this statement from its president, Franklin Graham, Thursday morning:

Today I join all of our Samaritan’s Purse team around the world in giving thanks to God as we celebrate Dr. Kent Brantly’s recovery from Ebola and release from the hospital. Over the past few weeks, I have marveled at Dr. Brantly’s courageous spirit as he has fought this horrible virus with the help of the highly competent and caring staff at Emory University Hospital. His faithfulness to God and compassion for the people of Africa have been an example to us all.

I know that Dr. Brantly and his wonderful family would ask that you please remember and pray for those in Africa battling, treating and suffering from Ebola. Those who have given up the comforts of home to serve the suffering and the less fortunate are in many ways just beginning this battle.

We have more than 350 staff in Liberia, and others will soon be joining them, so please pray for those who have served with Dr. Brantly — along with the other doctors, aid workers and organizations that are at this very moment desperately trying to stop Ebola from taking any more lives.

Hope at home-13 Liberians survivors in one week

While the American aid workers have now left hospital, on Wednesday, health authorities in Monrovia released 12 people who have undergone treatment at the Ebola isolation center in ELWA and were now tested negative for the virus.

The 12 survivors bring to 13 the number of Liberians to have walked home from the deadly virus within the space of a week after another Liberian Doctor, Dr. Zokonis Ireland survived the virus and was sent home from the John F. Kennedy hospital isolation Center.

The 12 survivors from the ELWA center also included a medical Doctor from the St. Joseph’s Catholic Hospital in Monrovia who contracted the virus while catering to infected patients in their respective areas of work. Other patients came from Nimba and Montserrado counties respectively on separate dates.

Presenting the Ebola survivors to the health ministry and family, the head of the treatment center at the ELWA Ebola center, Dr. Jerry Brown said some of the survivors were diagnosed positive of the deadly Ebola.

Dr. Browne said there were seven others of the twelve Ebola survivors who only a few weeks ago showed signs of Ebola: vomiting, fever amongst other symptoms and were critical and tested positive for the virus, but through care, they were able to pull through and their tests are now negative after weeks of proper treatment. Dr. Brown said the key to survival is early detection as he urged those infected to immediately report themselves to treatment center for proper care and treatment.

Lawrence Tumbay one of the Ebola survivors said “Getting a clearance today from the Ministry of Health and Social Welfare that I am free to go about with my normal activities bring tears to me”.

Tumbay lamented while struggling to come to terms with the reality that many of his former workmates are no longer around, the victims of the deadliest viral outbreak this country has seen. “My friends are no more, they were up to five, six, and those that survive, I don’t even know.

Liberia’s chief medical Officer, Dr. Bernice Dahn urged the 12 survivors to serve as ambassadors in their various communities. Dr. Dahn encouraged people to turn themselves in early when they begin to show signs of Ebola.

“We want to give God the glory, we are happy that we can see this many people come out today; people who have been tested positive and gone through medical management are coming out negative” she said.

Dr. Dahn said, Liberians must take the disease seriously and report themselves on time, saying the earlier the diagnosis, the better chances they have of surviving. As the brief ceremony came to a close, relatives of some survivors were seen dancing and singing praises to God for saving their relatives from the deadly Ebola virus.

Emmanuel Beyma Jr, who was on hand to receive his brother who survived the Ebola ordeal, said he felt relieved. “I feel very fine to come and see people leaving this place. It is a kind of a wonder”.

Wednesday’s tales of survivors capped an eventful day after clashes erupted in the slum district of West Point between army, police and residents who resisted a quarantine of the area, hours after the government imposed a curfew on the residents of West Point and Dolo Town.

The new wave of survivors of the disease creates hope that people can live again with the virus and could contribute to people coming to disclose to doctors and other medical practitioners that they are showing signs and symptoms of the virus since surviving is highly likely.

Latest United Nations figures show that between 17 and 18 August, there were 221 new cases and 106 deaths. On Wednesday, a top Lagos doctor has just died of the virus, bringing the number of people who have died of Ebola in Nigeria to five, the Nigerian health ministry said.

At least 1,350 people have died of the virus in four West African countries. The latest situation report on Liberia by the Ministry of Health and Social Welfare (MoHSW), as of this week, suggests that the cumulative total of suspected, probable and confirmed cases of Ebola Virus Disease (EVD) in Liberia was 826, including an updated total of 194 confirmed cases. The cumulative total of deaths stood at 455, including 172 confirmed Ebola-related deaths.