African Leadership Magazine
Home Interviews How We Made Delta State A Model for Grassroots Development in Nigeria... 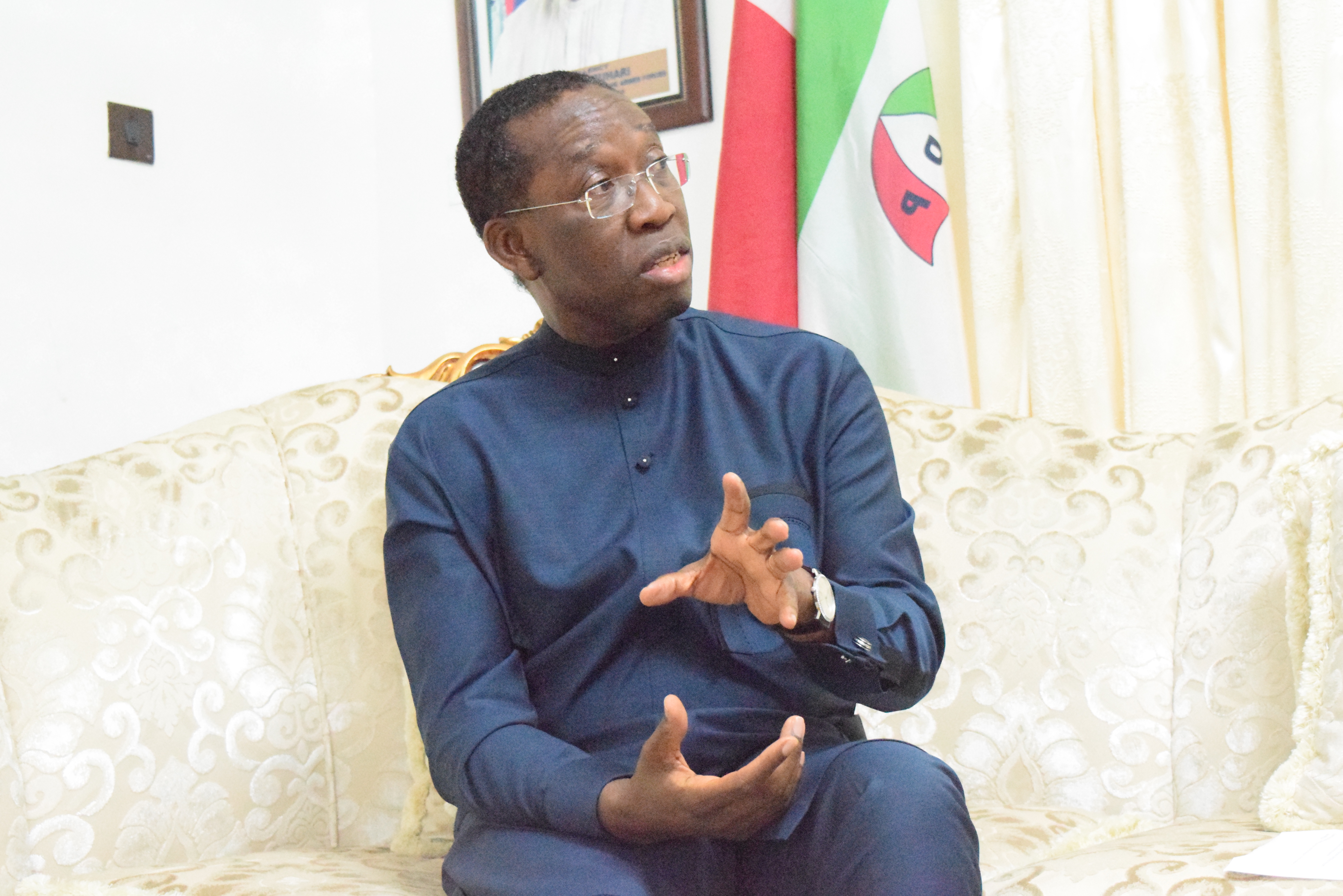 Governor Ifeanyi Okowa of Delta State, in the South-Southern region of Nigeria is on a mission to transform the state and reassure indigenes of the true essence of governance. The Governor’s SMART Agenda has in the past three years, contributed in providing a command model for grass roots and people development–through various means of capacity building and vocational training programs. The Governor, who recently emerged winner of the Best Governor–Grassroots and people Development in the Good Governance Poll organized by the African Leadership Group, spoke to our team on his efforts towards repositioning the state. Excerpts:

It has been three years since you assumed office as the Executive Governor of Delta state, how would you say your administration has fared vis-à-vis your SMART agenda?

I want to believe that we have done very well. It hasn’t been easy because of the very difficult times. I assumed office in 2015 when the economy was quite bad and by February 2016, it went further down because of the militant nature of our youths within the region. We have tried to manage the whole process of our economy by reordering our priorities. We have not gotten to where we expect to be, but we have done well. This is because the first thing we thought we needed to do was to stabilize the state by engaging the people and creating a peaceful environment for the economy to thrive effectively. We have a special adviser on peace building who works with a team of young people to engage the youths in the creeks. I also created a stakeholder’s forum led by His Excellency, Deputy Governor of Delta State, who had talks with leaders and youths in the creeks. This was the first item on the SMART agenda because we anticipated certain reactions. Also, you need to find a way of engaging the youths constructively. There has been a very high rate of unemployment recently and most successive governments have engaged the youth in public service. I think that was a wrong decision. Most state governments became over-bloated with staff. For instance, in Delta state, we had about 60,000 staff in the public service which was obviously too large. It resulted in a situation where the recurrent expenditure was very high. We thought it was best to move away from that and let our youths know that it’s better for them to acquire entrepreneurial skills to create jobs for themselves and also become employers of labor. Because we had prepared ourselves before the swearing-in which took place in May 2015, the first thing we did was to send the appropriations bills to the House of Assembly in order to create the Technical and Vocational Education Board. About 1,400 youths were engaged within the first year and that gave hope to the rest of the youths. Through the office of the Chief Job Creation Officer, people were trained in agriculture, aquaculture, piggery, and crop production. We also have the Skills Entrepreneurship Training Program on further skills such as computer engineering, fashion design, electronic works, building etc. 40% of youths were trained through the Youth Agricultural Entrepreneurship Programme and 60% in the Skills Training Entrepreneurship Programme. Before the main training programme commences, youths are tutored in a facility for a week, making them understand that they do not have to be aggressive to survive. After six months, they are made to converge again and are tutored on the advantages of being accountable. Young people always face challenges while delving into entrepreneurship. In light of this, a mentoring and monitoring unit was created to discuss these challenges. According to a recent analysis, 65% of these youths are now full stable in their business. In the past, it used to be less than 20%. World Bank partnered with us when they saw the success of the programme and provided 60% of the funds required. Our polytechnics and universities have also included entrepreneurship programmes in their curriculum. In the health sector, we have worked on the health insurance scheme. Since January 2017, we have started the Contributory Health Scheme, focusing on the vulnerable – women and children under the age of 5.

Available statistics show a growth in the state’s IGR of over 63% between 2015 and 2016 and a significant growth since then, how were you able to achieve this feat?

The first thing to consider is peace. Once you are able to achieve peace, which we have, multinationals and other organizations will begin to get more comfortable. We have tried not to impose too much on the people because of the state of the economy but we have also encouraged them to be a part of the tax bracket.

Your administration has recorded major milestones in the areas of road infrastructure, capacity building training for youths, job and wealth creation. We would like to know what your state is doing differently considering that some states in the country are unable to meet as basic as monthly obligations to workers.

When we came in, we had quite a lot of issues with the payment of salaries. Developing roads and building structures was almost a nightmare. We were hopeful that we could manage our resources. We had a lot of debt when we came in and together with the Minister of Finance, we had to restructure our debts, such that, we were paying less monthly – from N5Billion to 2.3 Billion – and this helped us a great deal in taking charge of our salaries. Being proactive, we had discussions with our existing road contractors and also tried to bring in new ones. We realized that we had to prioritize our road constructions in order to avoid having numerous abandoned road projects. Also, there has been efficient budget planning. Unlike other states, our budget is within the range of about N200Billion – N300Billion. Over-budgeting gives you an impression that you have a lot of money to play with in terms of capital expenditure, which may leave you running into problems. We have received praises for being able to keep our budget within the limit. In terms of road development and floods, I plan to construct road networks across the states, especially the riverine areas.

Opinions have remained divided over your achievements in the last three years; while some have argued that it has been exceptional, others have maintained that it falls below expectation. What is your administration doing to engage those who are yet to appreciate the strides of your administration?

No matter how well you do, people will surely criticize you. Those that criticize are political in their criticism. If it’s about the actual work on the ground considering the level of the economy, they would not have anything to say. I also know that some of our opponents in other parties appreciate what we are doing and have spoken highly of our work. Traditional rulers, opinion leaders, women, and the youth are also excited about the progress in the state. I have promised to involve the people at every point in time to let them know what we are doing and give them the opportunity to participate. I am committed to the people and I thank God and appreciate the people for partnering with us in governance because that enables us to do better.

You are one of the leading voices in support of restructuring in Nigeria. Do you see this as a solution to Nigeria’s current challenges?

It is definitely one of the major solutions. We cannot wish it away. The Federal Government needs to realize that the State Government has greater roles in the process of governance, likewise the Local Government and traditional institutions. We also need to review revenue allocations. Some states are growing rice; others have gold deposits and many other minerals that have not been developed. Everything is within the hold of the Federal Government which is why the states are not stirred up to be part of the development. These are issued that need to be discussed. This will reassure the people that we are truly united as a nation.

Your party, the PDP, is looking to take over power at the center come 2019; the ruling party has described this as a pipe dream; how do you see this happening?

We are working hard as a party. First, we have to cross the level of the convention and a number of people have shown interest. Each of them is stimulating a lot of followership and that makes us stronger. We have to ensure that there is a convention that produces a primary election that is free, fair and delivered with no manipulation.

How do you feel about this honor from African Leadership Magazine UK and our partners in the United States?

I am thankful to God that I am considered fit to win this award. I appreciate it and I believe it will challenge me to connect more with the people and do more for the people. I am quite excited.