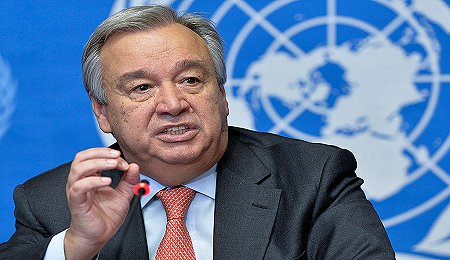 U.N Secretary-General, Antonio Gutterres made this advocacy in the Ethiopian capital, Addis Ababa on Monday 9th of July, 2018 in a joint press conference with African Union Commission Chair Moussa Faki Mahamat following the Second Annual Conference of the U.N. and Africa, a new partnership founded in April 2017 in New York.

The partnership between the international and continental bodies began with cooperation in peace and security, and was extended to include development in January.

According to Gutteres, “It is a horrific conflict and needs to stop” stating a recently held Khartoum meeting between South Sudan’s warring parties. The objective now must be to make peace prevail. We see a ray of hope and we appreciate the courage of the Ethiopian prime minister.”

Mahamat, stated the situation is very critical, especially on the humanitarian front. “The humanitarian situation has gone beyond what is acceptable, urging the warring factions to honor a cease-fire and deal to open a humanitarian corridor.”

The young country plunged into crisis in late 2013. A peace deal signed in 2015 briefly halted the conflict. But the peace was soon shattered by renewed fighting that erupted in mid-2016 amid mutual recriminations.

Both Guterres and Mahamat lauded Ethiopia and Eritrea for the resumption of diplomatic and economic rapprochement.

Yesterday Ethiopian Prime Minister Abiy Ahmed paid a two-day historic visit to Asmara, where Ethiopia and Eritrea agreed to resume diplomatic relations, open air and telecom services, and for Ethiopia begin use of the port of Assab at cheap rates.

Talking on the ban issued to Eritrea, the U.N Sec. General stated that Eritrea would need to show the reasons that led to the sanctions were obsolete before it can be lifted.