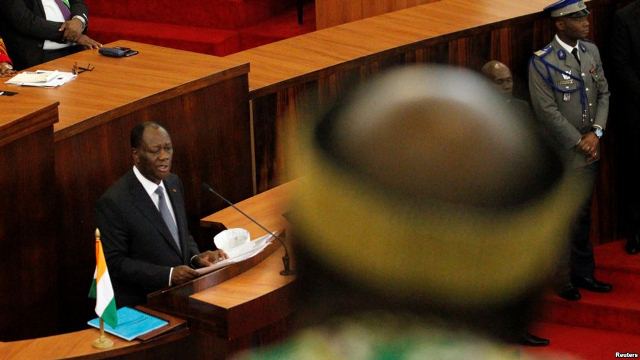 Ivory Coast President Alassane Ouattara presented the draft of the new constitution to parliament Wednesday. Among the reforms is the removal of a clause that helped trigger civil war five years ago.

The clause, Article 35, required that both parents of presidential candidates be natural-born Ivory Coast citizens, according to Reuters. The new constitution would soften that rule.

“The spirit of this draft for the new constitution is to reinforce social cohesion, to assure our country peace and stability,” Ouattara said. “It is also the opportunity to definitely move on from the past crisis that our country went through.”

Ouattara himself was blocked from several presidential elections by claims his parents were foreigners, thus rendering him ineligible to run.

But the opposition denounced the draft, which would create a deputy president and a Senate, saying it was not the result of a national consensus and was being forced through.

“We all agree on the reform of Article 35 since we all signed the [Linas-Marcoussis] peace deal,” said opposition member Pascal Affi N’Guessan, from the Ivorian Popular Front party. “But the peace deal didn’t say we had to write a new constitution entirely, or that we should implement bicameralism.”

He said Ouattara “betrays the spirit of the peace deal, he manipulates it … for personal gains.”

The draft also removes the age limit of 75 for presidential candidates. Some members of the opposition argue that Ouattara, 74, might have removed the age limit in order to seek a third term in 2020. But the new constitution stipulates the president is only re-eligible once.

Parliament has until October 15 to approve the draft, then the text will be submitted to Ivorian voters during a referendum October 30.