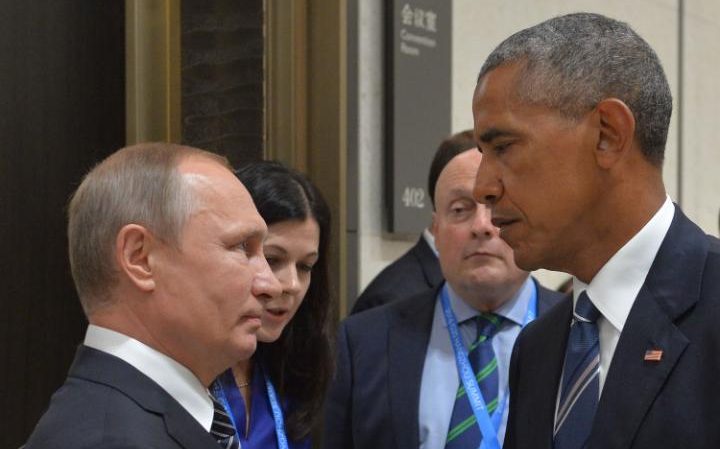 By Arshad Mohammed and Jonathan Landay

Confronted by Russia in Syria, Ukraine and cyberspace, the next U.S. president will be the fourth to face Vladimir Putin and the challenge of deterring a Kremlin often more willing than the White House to take risk and project power.

In his latest gambit, Putin this week suspended a treaty with Washington on cleaning up weapons-grade plutonium.

While the United States has imposed economic sanctions on Russia for its actions in Ukraine, these have yet to force it to calm tensions in eastern Ukraine, let alone surrender Crimea.

Some current and former U.S. officials argue the White House has failed to understand Putin’s bitterness about the decade after the Soviet Union collapsed, at a time the Russian leader feels the West took advantage of Russia when it was down.

Further, they say the United States has little influence over the course of democracy in Russia, or on its willingness to use force in Syria, Ukraine or elsewhere to achieve its ends.

The result, critics say, could be that Syria festers, Ukraine stays off balance and unable to draw closer to Europe, and that even areas such as arms control and nonproliferation, pillars of cooperation during the Cold War, could deteriorate.

“For Putin and most of the Russian leadership, it’s a zero-sum world,” said Andrew Weiss of the Carnegie Endowment for International Peace think tank.

Weiss argued the Russian leader was unlikely to change his stripes before Russia’s 2018 presidential election “in an atmosphere where Putin’s own domestic political fortunes depend on having this external enemy, namely the United States”.

A U.S. official suggested Putin, who has yet to tip his hand but is expected to run again, is willing to use force to get his way while the White House, scarred by the U.S. wars in Iraq and Afghanistan, is not.

“The administration never understood how bruised Putin and many, many Russians feel about the 1990s, or how determined they are to regain what they consider Russia’s rightful place in the world, much less what Putin is willing to do to get there,” said the official, who spoke on condition of anonymity.

“He will keep pushing until he meets serious resistance, and so far he hasn’t,” the official added.

In the eyes of many current and former U.S. officials, Syria is a case in point.

The United States this week announced it was suspending talks with Russia on a ceasefire, all but saying the Russian and Syrian assault on Aleppo had made a mockery of the peace effort.

“Where they make a desert, they call it peace,” Secretary of State John Kerry said, quoting the Roman historian Tacitus.

Analysts believe Aleppo is likely to fall but the war, now in its sixth year, will grind on with Assad surviving atop a shrunken, broken and fragmented country enduring the world’s worst refugee crisis since World War Two.

U.S. officials say the White House has yet to decide what to do next on Syria but few expect Obama to shift strategy in his waning months in office.

It is not considering imposing further sanctions on Russia for now, two U.S. officials said.

On Monday, Putin suspended a treaty with Washington on cleaning up weapons-grade plutonium, signalling he is willing to use nuclear disarmament as a new bargaining chip in disputes with the United States.

“If the relationship worsens, either side could be looking to exert leverage or score points in the nuclear arms control realm,” said Daryl Kimball of the Arms Control Association.

Another area where the United States is weighing its options is the stealthy war in cyberspace that is already under way with Russia and could escalate as relations worsen.

The Kremlin denies the allegations.

The White House has refrained from publicly accusing Russia. If hard evidence of Russia’s involvement emerges, Washington has a dilemma in fashioning a response because, by going public, it could tip Moscow to its own intrusions, prompting retaliation.

Two U.S. officials suggested critics are taking too short term a view, arguing it can take years to achieve an objective, such as the liberation of the Baltic states from Soviet rule.

Cold War-like policies, such as using economic sanctions to weaken Russia’s economy or deploying NATO troops to the Baltics and Poland in January to deter Russia, may work over time.

“There’s no quick fix with the Russians,” said one official.