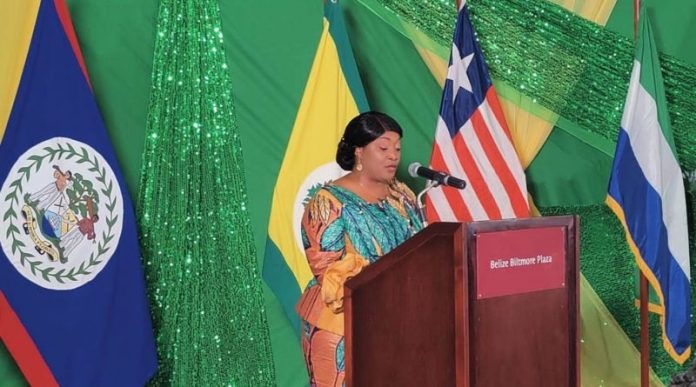 The vice president of the Republic of Liberia, H.E Chief Dr. Jewel Howard-Taylor, has been awarded the She4she Champion for 2022. She received the honour on Saturday, March 5th, 2022, in Belize at the She4She Champions World Summit organized by the Belize Mayors Association, in collaboration with the Belmopan City Council.

The summit, held in celebration of International Women’s Month, took place from March 4-6 at the Belize Best Western Biltmore Plaza. The summit, the first of its kind and the brainchild of Belmopan mayor Sheran “Sharon” Palacio was held under the theme “Towards Inclusive Leadership in Governance and Political Affairs” and featured discussions surrounding women’s leadership.

VP Howard-Taylor expressed delight in receiving the honour and thanked the summit organizers. She also expressed gratitude to God for the unlimited favour and those that have provided platforms for recognizing her work.

“As I took hold of this beautiful piece of ART; created by Mr. Palacio; the creative Sibling of Lord Mayor Sharan Palacio; the Originator of the first World She4she World Summit, I was humbled.

“As I realized the enormity of the work associated with this Global Award.

“Howbeit, I have been chosen and given this award. I am grateful firstly to the Almighty God for his unlimited favour. Then to my Spiritual Fathers, my prayer partners, Mayor Palacio, the organizers of the first SHE4SHE SUMMIT, the Women of Liberia and Africa; the Women’s Political Leadership Organization, the African Women’s Leadership Organisation, the African Women Leaders Network, Sheroes and many other organizations that have provided platforms for recognition of my work. I am truly grateful,” she said.

The VP went further to thank the beneficiaries of Jewel Star Fish Foundation, whom she says have trusted her with their future.

“And last but never least, the Jewel Star Fish Foundation Beneficiaries who have trusted me with their future….this award is for each of you. Thank you for the amazing journey you have taken me on. I know we have many more adventures to complete… My prayer is that God will see us through until each of you reach your destiny.”

Speaking earlier on the sidelines of the event, Vice President Howard-Taylor told-that she believes the most important thing for women to remember when faced with challenges is to be steadfast even in the face of adversity.

“Challenges will be everywhere, but if you are determined in your soul that this is what you want to do, you should be willing to face the music, but keep focused on what you want to do,” she said. Also highlighting how important it is for women to come together and support one another, the Vice President noted:

“I want to say to Belizean women, whether you are young or middle age or aging, there are still opportunities for women to come together, more so for the younger women, because they are the next generation, and those of us who are on the stage now must begin to prepare those who are coming after us so that this struggle for equality isn’t lost.”

She cited Madame Ellen Johnson Sirleaf, who made history as the first elected female head of state in Africa, noting that thanks to her and women like her, the journey for other women is much easier.