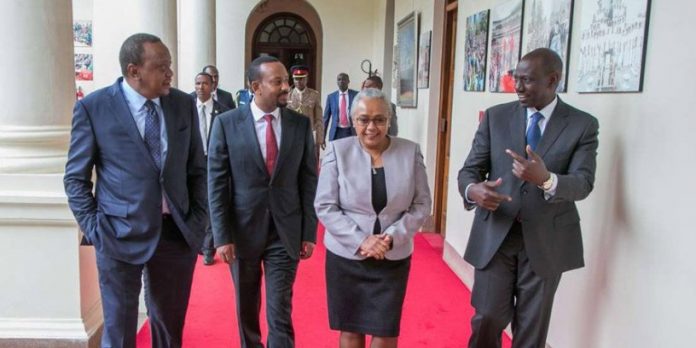 President Uhuru Kenyatta and Ethiopian Prime Minister Abiy Ahmed said that the regional infrastructure initiative is central to the unlocking of the economic potential of not only Kenya, Ethiopia and South Sudan but that of the entire East African region.

Speaking when they presided over the official opening of a two-day Kenya-Ethiopia high-level trade forum in Addis Ababa, Ethiopia, the two leaders promised to deepen trade and economic ties between the two countries. “In my mind, the LAPSSET project has great promise of transforming our countries and improving the living conditions of our people. Kenya and Ethiopia resolved to partner in developing first class infrastructure projects connecting our great nations and the continent. By this I have in mind the LAPSSET project which Kenya is, for sure, still fully committed to” President Kenyatta said.

President Kenyatta is in Ethiopia on a two-day official visit at the invitation of Prime Minister Abiy Ahmed and is accompanied by a high powered trade delegation.Besides pursuing joint infrastructure projects, President Kenyatta and PM Abiy called for the fast-tracking of the ongoing transformation of Moyale town into a cross-border trade hub in the region in line with the 2012 Special Status Agreement (SSA).

President Kenyatta invited the Ethiopian private sector to invest in the big 4 agenda projects as he challenged the business community to innovate new opportunities for trade collaboration between Kenya and Ethiopia. Prime Minister Abiy said Ethiopia was open to Kenyan investors and called for the strengthening of trade relations between the two countries.