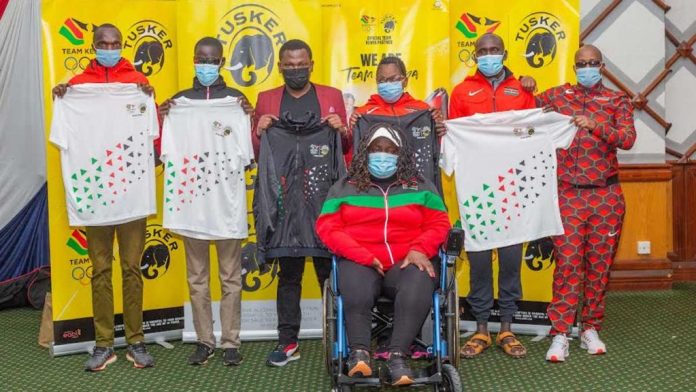 The Kenyan Paralympic team has received a boost from the Kenya Breweries Limited through their brand Tusker who presented the team’s official travel kit to them ahead of the 26th edition of the Paralympic Games in Tokyo, scheduled for September 2021.

Tusker Brand Manager, Kennedy Mutula, present at the official travel kit handover to the Kenya National Paralympics Committee, commended the team for their commitment and preparation for the upcoming games in Tokyo this month.

“We applaud the Kenyan Paralympics team for their meticulous preparations through the qualifying stage and finally as they set out to Tokyo to represent us at the Paralympic Games. As Tusker, we felt it was necessary for Kenya’s Paralympians to dawn their national attire that speaks to the support they have back home. We hope this kit adds that extra bit of motivation as they travel to conquer the world as this year’s games” he said.

Kenya’s travelling contingent consists of 54 athletes and officials who will represent the country in its 22nd competition since its initial participation in the 1972 Paralympic Games.

Mutula appreciated the efforts put in place by Kenya Paralympics National Committee (KNPC) to provide platforms that all Kenyans can express themselves with. He believed that such platforms will enable the team to don the country’s national stripes and represent it well at the games.