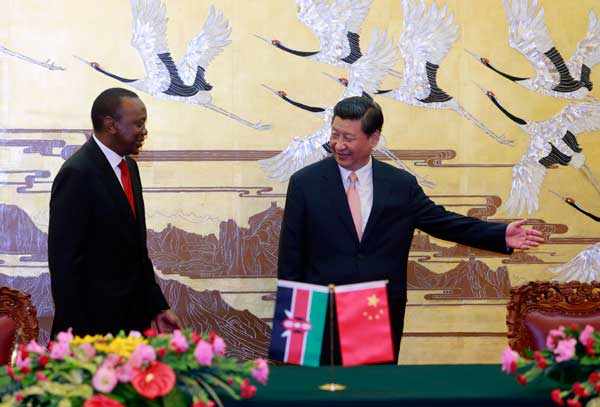 Kenya secured Sh21.9 billion financial assistance from China for infrastructure development and drought mitigation. The money includes a Sh19.2 billion grant to deepen ties between the two countries. An additional Sh2.2 billion (150million Yuan) is for measures to tackle drought and a further Sh500 million (5million Yuan) for refugees.
The deals were sealed during bilateral talks between President Uhuru Kenyatta, Chinese President Xi Jinping and Prime Minister Li Kequang at the Great Hall of the People. The talks were on the sidelines of the just-ended Infrastructure International Conference in Beijing, China.

Kenya is also angling for part of the Sh870billion China offered developing countries for the multi-billion Silk Road Fund infrastructure development. In turn, the Chinese are enticing Kenya to open her skies. President Xi and Li are seeking partnership in the aviation industry, where Kenya would buy aircraft from China and in return, allow Kenya’s registered planes to access its routes.

President Xi is keen to have a comprehensive and strategic relationship with Kenya, as he affirmed his commitment to the conclusion of the Standard Gauge Railway (SGR). On the commercial front, Uhuru also sought a Sh362billion ($3.59billion) loan for the third phase of the SGR from Naivasha to Kisumu and $161million for the construction of the Western by-pass by the China Roads and Bridges Corporation signed last year. President Kenyatta urged the two leaders to accelerate the issuance of the loans sought from China’s EXIM Bank to facilitate the completion of the projects. “The bank should fast-track the process of the loans,” Uhuru said. Xi and Li said China supports the projects, though the request would be processed in normal terms once National Treasury puts in a formal request.

Subsequently, President Kenyatta in reinforcing his resolve to see the SGR through Kampala and Kigali, Rwanda, informed the two leaders that he had spoken with Yoweri Museveni (Uganda) and Paul Kagame (Rwanda) about the matter and how they can collaborate. “We have spoken and agreed to send a joint team to China to negotiate on the financial aspect,” he said.
President Xi and Li also reciprocated by confirming they would set up a team to discuss the matter with the East Africa officials upon their arrival. President Kenyatta invited Xi to come witness the inauguration of the SGR project, which he expressed his willingness to grace but due to other commitments, promised to send his special envoy, two ministers and one vice minister to the inaugural ride of the rail, to be commissioned on May 31 in Mombasa. “I am very supportive of the project. It will connect Africa, Asia and Europe,” said Xi.