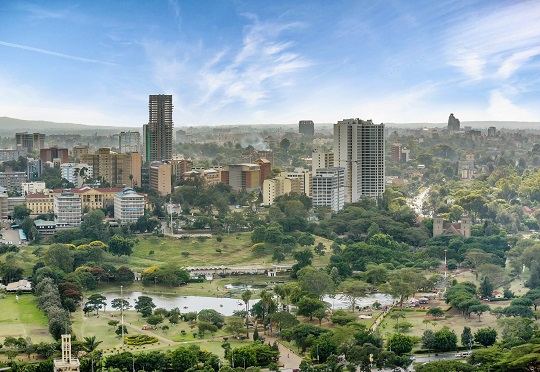 Kenya targets to attain 100 per cent transition to green energy by 2020 as it scales up investment in renewable energy to address the climate change challenge concretely, President Uhuru Kenyatta has said.

President Kenyatta pointed out that, in concrete terms, renewable energy makes up 70 per cent of Kenya’s installed electric power capacity.

The President said the aggressive investments to reach this figure have been made simultaneously with Kenya almost tripling the size of its population served by the electricity grid to more than 60 per cent of the population.

“Our target is to attain 100 per cent green energy sufficiency by 2020. We will do this while we achieve 100 per cent access to power for our population, and sharply lower costs to industry to aid our manufacturing push,” President Kenyatta said.

The Kenyan leader spoke during a roundtable discussion on “Don’t drop climate efforts” session of Paris Peace Forum in France.

Speaking alongside Presidents Omar Guelleh of Djibouti and Denis Sassou Nguesso of the Republic of the Congo, President Kenyatta said Kenya’s investment in green energy is proof that doing the right thing is more than a cost but rather a chance to offer immense opportunities for business growth and enhancement of citizens’ quality of life.

The President challenged governments of industrialized countries, especially in Europe, where sustainability has been embraced, to support such investments in green energy in Africa.

He said doing so would help mitigate and even reverse the effects of climate change while delivering the jobs and opportunities that will strengthen security and stability on the continent and the world.

“To do even more, we need support from the Green Climate Fund and other mechanisms to enhance our green energy capabilities and accelerate adaptation and mitigation of the impact of climate change,” President Kenyatta said.

He emphasized that Kenya is open for business in the manufacturing of green technologies and will work hard to enable investors in this field to thrive.

The President added that Kenya is implementing the commitments it has made under the major international instruments and believes that every country should do the same.

President Kenyatta spoke of the need for multilateralism to make its mark in solving major challenges ranging from insecurity, the fascism of global Jihadism, and the effects of climate change.

The Head of State said climate change is not an abstract threat in a far-off future but a defining security and development challenge of our time.

President Kenyatta observed that although African countries were nowhere close to the top producers of greenhouse emissions, they are nevertheless, champions of sustainability because they know the painful price of inaction in the face of climate change reality.

“It is driving patterns of movement and reaction to unusual and destructive weather patterns that are leading to mass violence, lost livelihoods, and a resulting appetite for large-scale migration,” the President said.

He added: “Africans are living this as a reality, and scientific evidence shows that Africa may continue to bear the greatest brunt of climate change.”

President Kenyatta expressed optimism that leaders across the world have an opportunity to show their commitment by ensuring that they adopt a comprehensive programme of work that will operationalize the Paris Agreement when their countries meet at the 24th Conference of Parties of the UN Framework Convention on Climate Change (COP24) in a few weeks time.

Noting that the world marks 100 years since the end of the First World War, President Kenyatta said humanity has learnt a severe lesson that lack of a strong multilateral system that can resolve conflicts and deliver solutions to cross-border challenges is a huge risk.

“We learnt terrible lessons in the past century when we sought to walk alone, rather than join hands in the enlightened solidarity of multilateralism,” the President said.

President Kenyatta took the opportunity to invite leaders to attend the first ever Global Conference on Sustainable Blue Economy on the 26th to 28th November that Kenya, Canada and Japan are co-hosting in Nairobi.

“We are meeting to find concrete ways to collaborate on sustainably creating the blue economies that will deliver millions of jobs and food security throughout the world,” President Kenyatta said.