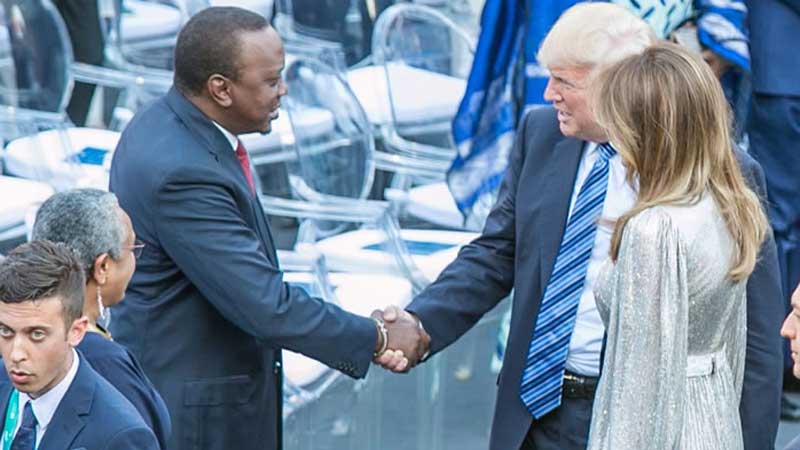 President Uhuru Kenyatta will today 27 August, 2018 hold landmark talks with Donald Trump in the White House, where cooperation between the two countries in security and governance will be deliberated on immensely.
Monica Juma, Kenya’s Foreign Affairs Cabinet Secretary stated that the Heads of State will also discuss trade, investment, and partnership in regional and international matters.

During the visit President Kenyatta will also meet executives of top U.S companies to promote Kenya as a preferred investment destination.
According to experts, the visit is an opportunity for President Kenyatta to strengthen the bilateral relations with the most significant country in the world today.

One of the items that will feature prominently during President Kenyatta’s historic meeting with President Trump will be how to increase Kenya’s export volumes under the African Growth and Opportunity Act stated Monica Juma.
Robinson Githae, Kenya’s Ambassador to the U.S stated that the visit is expected to increase trade investment Africa particularly in Kenya.

“America is looking towards Africa, so it is not us who look to the East; it is America that had ignored Africa. I have said that to them several times and they have admitted it.”
“That they had not looked to Africa as a trade Partner. But now they are, and you can see from the number of Companies that have set up base in Nairobi and we want more to do so,” he stated, but warned that the president will not meet Kenyans living in the U.S due to his tight schedule.

President Kenyatta after the U.S visit will fly back to Kenya to welcome U.K Prime Minister Theresa May who arrives on Thursday for talks on strengthening relations between the two countries.