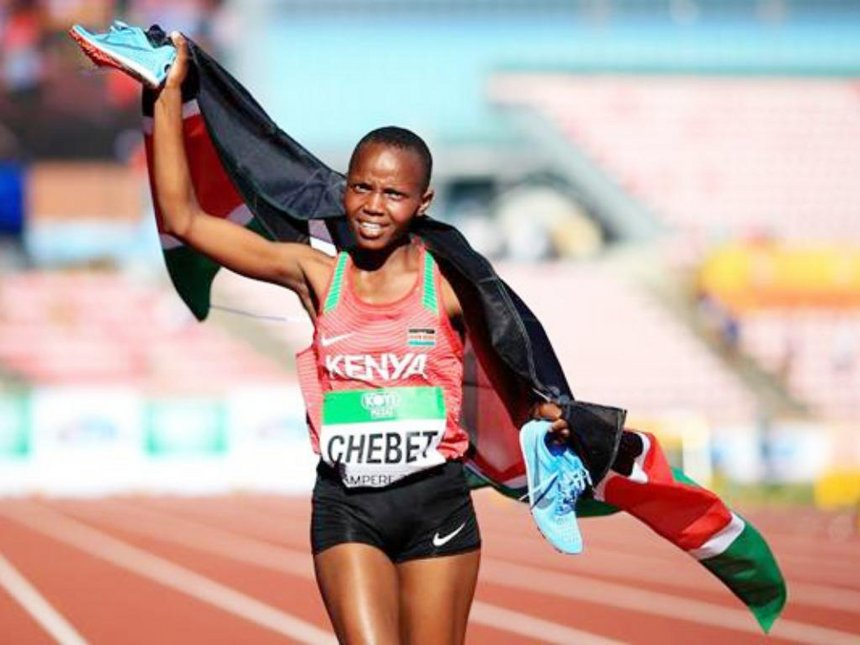 Kenyan athlete has won her first gold medal in the IAAF world U20 championship in Finland. Ms Chebet was superb on the last lap, kicking past longtime leader Ejgayehu Taye of Ethiopia off the final bend, to cross the finish line in a Personal Best of 15:30.77.

Ejgayehu Taye of Ethiopia settled for silver in 15:30.87 while compatriot Girmawit Gebrzihair took bronze in 15:34.01. Japanese Tomomi Takamatsu took the early lead, towing the pack through 1000m in 3:07.71 but heading to the next lap, Kenya’s Hellene Lobun crashed to the track, losing several meters after colliding legs with her rivals.

However, she had the energy to wake up and re-fill her lungs with air and nestled in the pack. The field passed 2000m in a not-so-fast 6:21.37 and 3000m in a chilled-out 9:35.28, with Takamatsu of Japan continuing to lead, but she surrendered it to the East African brigade comprising of Kenya, Ethiopia and Uganda as Ejgayehu took over the driving seat.

With two laps to go, the pack was trimmed to five, containing two Kenyans (Chebet and Lobun), two Ethiopians (Ejgayehu and Girmawit) and one Ugandan (Sara Chelangat) at the front. On the bell, the athletes unleashed the afterburners with still Ejgayehu leading as compatriot Girmawit hanging on her shoulder, but the pace was sizzling hot allowing Chebet to produce a jaw-dropping performance, kicking past Ejgayehu at the final bend, and holding a slight edge all the way to the finish.