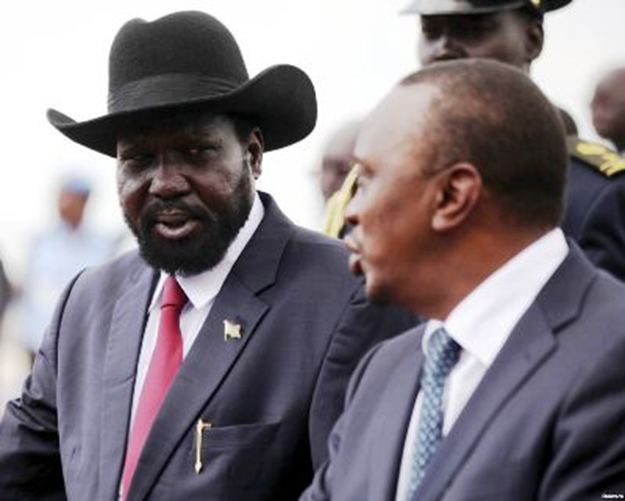 The South Sudanese President, Salva Kiir and his Kenyan counterpart, Uhuru Kenyatta met on Tuesday to discuss modalities on how to implementat the shaky peace accord that ended South Sudan’s over 20 months conflict.

The two leaders held a closed door meeting and the presidential palace, which was a scene of fierce clashes last month between bodyguards of Kiir and those loyal his ex-deputy, Riek Machar.

The shattered roofings and bullets marks were still visible on windows and the wasll fense. President Kiir, however, told Kenyatta that fighting ceased after Machar fled Juba in July.

“There is fighting here in Juba as you have witnessed contrary to what is being said about Juba,” said the South Sudanese leader Kiir, flanked by his Kenyan counterpart.

Kenyatta, who was accompanied by his foreign affairs minister, Amina Mohammed and other dignitaries, was on his first trip to the war-torn country since last August.

He said implementing the peace agreement was top of the agenda during their meeting.

“Kenya will support you to restore peace in the country. This is the country you fought for decades and we will help you,” the Kenyan leader told reporters in the capital, Juba.

“[We discussed] how to put the peace process in South Sudan back on track,” added Kenyatta, whose nation is among the regional countries willing to contribute the 4,000 troops authorised by United Nations Security Council (UNSC) to be deployed in Juba. 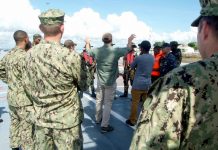