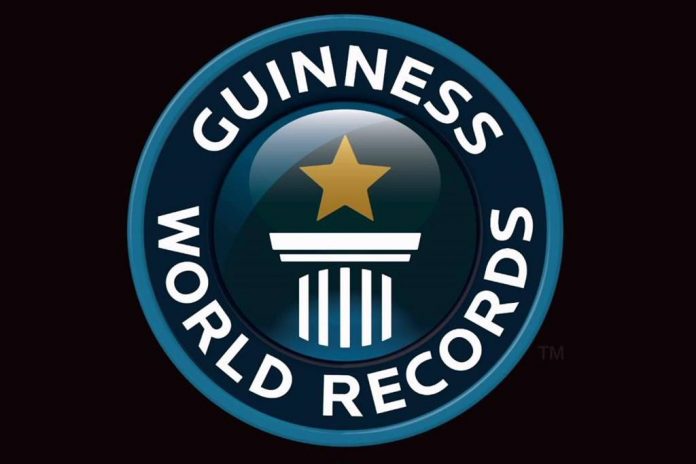 The Lagos state government with support from Fly Africa has put Nigeria on the Guinness book of world record by celebrating the 60th Independence anniversary with 60,000 cupcakes to produce the largest anniversary logo in the world, made with cupcakes mosaic.

Nigeria now holds the world record for the most massive logo made during an anniversary from cupcakes mosaic. Nigeria achieved this feat during its recent Independence Day anniversary.

The Lagos State Government dubbed the landmark anniversary held on the 1st of October 2020, sweet 6ixty. The anniversary took place at the famous Teslim Balogun Stadium, Surulere, Lagos. Spectators were allowed to watch as 150 volunteers made history by arranging 60,000 cupcakes to form an anniversary logo.

Mrs Oluremi Hamzat (Lagos State’s deputy governor’s wife) who represented the Governor of Lagos State Mr Babajide Sanwo-Olu, expressed the governor’s feelings during the occasion. She said that the laying of the cupcake mosaic sends a message to the world, telling them that Lagos is the home of innovation and creativity.

She noted that the earlier holders of the record were Singapore after they designed a 30,400 cupcake mosaic in 2015.

She further called on everyone to partner with the Lagos state administration to make Lagos a state we can all be proud of.

Mrs Uzamat Akinbile-Yussuf, the Lagos state commissioner for tourism, arts, and culture in an opening speech, said: ‘The relevance of Lagos State in Nigeria cannot be undermined as the state has been channelling its efforts into activities that have strengthened the nation economically, culturally and socially. Our great state has no doubt been serving as the melting pot for Nigeria’s tradition and culture.

‘The coming together of Fly Africa and the Ministry of Tourism, Arts and Culture for this event, which is one of its kinds in the history of this nation, underscores Lagos’ rich attractions that have earned the country a global voice and respect across the continent.

‘It is also commendable that we are equally using this event to eye World Guinness Record through the laying of the largest cupcake mosaic in different colours, is the first-ever in the world.

‘I appreciate the almost 150 volunteers who came together to make this possible as well as the various partners for this event.’

Mr Wole Olagundoye, who is the current managing director of Fly Africa, explained that the landmark event is an initiative that was designed to educate and inspire Africans using real-life experiences. He hopes that this initiative will spur Africans to rise to their potentials and take steps to move the continent forward.

He further stated ‘Only Africans can make Africa succeed, our destiny is not in the hand of other nations but right in ours, and we must seize this moment to make the necessary change.’