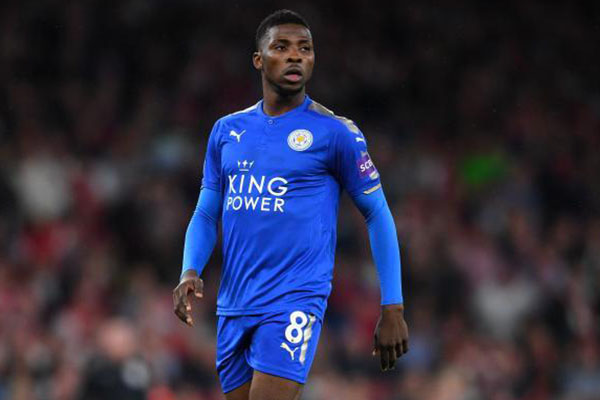 Foxes coach Claude Puel will be banking on Iheanacho’s league record at the ground and hopes his side comes back with at least a draw.

Iheanacho will hope to be the match winner again when he returns to Old Trafford tonight when Leicester City will be guest of Manchester United in the opening fixture of the 2018/2019 premier league season. This will be Iheanacho’s first trip with Leicester City to the Theatre of Dreams but the Nigerian have made the short distance trip when he was still dorning the Blue colour of Manchester City.

The Nigerian was an 83rd minute substitute for Wilfred Bony in October 2015 on his first trip to Old Trafford with the game ending 0-0.
Iheanacho became an instant hero the following season, this time under the guidance of Pep Guardiola as he fired the ‘Noisy Neighbors’ to victory in a 2-1 win. The Nigerian doubled Manchester City’s advantage in the game on 36 minutes; exactly 21 minutes after Kevin De Bruyne had fired the Citizens to a deserved lead.

The Eagles star was however on the loser’s side in his third trip to Old Trafford, this time in a League Cup game as the homers won 1-0 with the Nigerian getting a yellow card.

He scored three goals in pre-season with Leicester and his compatriot at the club, Wilfred Ndidi has backed his Nigeria team-mate to take his goal-scoring form into tonight’s game.
Ndidi revealed he and Iheanacho have been doing extra training together to get themselves prepared for the start of the Premier League season on Friday night, having both returned late to pre-season following their own exploits in Russia. “Yes, Kelechi is getting there because we work every day in training.”
Puel has also challenged Iheanacho to reproduce his pre-season form tonight at Old Trafford.