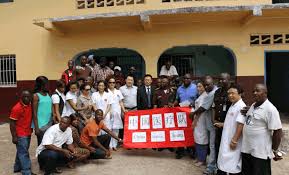 In a bid to address some medical completions that might be faced by officers and staff of the Bureau of Immigration and Naturalization (BIN), the 9th batch of the China Medical Team has recently launched a long-term medical program with BIN.

The Bureau of Immigration and Naturalization is one of the security departments under the Ministry of Justice of Liberia that deals with alien matters.

Speaking at the launch, the head of the 9th China Medical Team, Dr. Sun Li Lijuan, said under the arrangement, Chinese Doctors from the team will visit BIN’s headquarters to conduct free medical services and each clinic would last for three hours.

She pointed out that the initiative marks the second time the team is doing clinic in Liberia, stressing that the team is poised to do more clinics for grassroots according to the need of Liberian people.

Lijuan also stated that the work of the 9th China Medical Team is intended to benefit the masses, and as such, will at the same time keep the long-term cooperation between China and Liberia.

Giving details about the group, Dr. Sun said the team consists of nine members in total, out of which six are Medical Doctor for internal medicine, orthopedics, ophthalmology, gynecology, acupuncture, and ultrasound departments.

“Following the leadership of Chinese Embassy, all China Medical Team members will carry on the humanitarian spirit; strictly perform the sacred duty of saving lives. We will continue the China Medical Team spirit. Regardless of the hardships, we are willing to contribute, saving more lives, with boundless love,” the Medical Team head pledged.

Chinese Defense Attaché, Senior Captain Zhang Feng Hua, said though the partnership is the first of its kind between BIN and the China Medical Team, he is convinced that there will be more opportunities to build more amicable cooperation between the two institutions.

According to him, the medical teams of China has always been carrying out medical work smoothly and provide convenient and proper medication for local people, and they held medical training programs and made many free community clinics here, which have gained good reputation for not only themselves, but Chinese government as well.

Mr. Zaizay said the gesture by Chinese Doctors will promote immigration functions, because according to him, the healthier the officers are, the more active they will be in the discharge of their assigned duty.