As part of efforts to foster peace in Libya, rival parties have recently met in Tunis for discussion on a disputed UN-brokered deal backed by the international community to set up a unity government in the North African country.
The discussions focused on moving the process forward ahead of an international meeting on Libya scheduled for Sunday in Rome, the United Nations Support Mission in Libya (UNSMIL) said.
The UN envoy for Libya, Martin Kobler, and representatives of rival parliaments took part in the discussions at a hotel in a Tunis suburb, with foreign diplomats invited as observers.
Kobler, who only took over from his predecessor last month, said he felt “very encouraged” by what he heard in the talks, adding that the parties would meet again on Friday.”I’ll go with big confidence in our meeting tomorrow because we are going to define the messages for the meeting in Rome,” he told reporters.
“The international community is very interested in this process, in particular the threat emanating from terrorism,” he said.”There must be a legitimate government very soon”.
US Secretary of State John Kerry will co-chair Sunday’s discussion in Rome with his Italian counterpart Paolo Gentiloni.Representatives from Russia, Britain, China and France will also attend the conference, which comes at a time of growing international concern that ISIS has been exploiting the chaos in Libya to take root in the country.
Libya has had two administrations since August 2014, when an Islamist-backed militia alliance overran Tripoli, forcing the recognised government to take refuge in the east.
Before now, the rivals announced agreement on a joint “declaration of principles” aimed at resolving the crisis that has engulfed Libya since 2011. 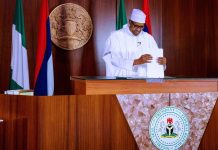