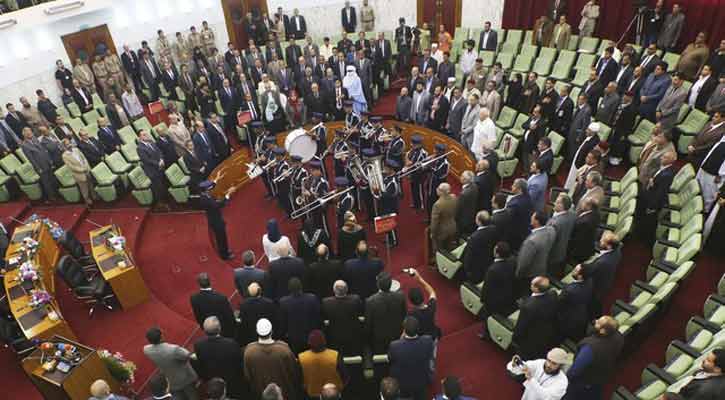 A total of 83 of 93 members present voted in favor of Mitig’s government.

The threat was issued by the same group that attacked the GNC headquarters in Tripoli last week, triggering fighting across the capital that left at least four people dead and dozens injured.

Shortly before the vote in parliament, the EU’s special envoy to Libya described the situation as the country’s worst crisis since 2011.

“This is the worst crisis Libya has known since the war. Political forces should understand the anxiety of the Libyan people, who expect effective solutions for their daily concerns and problems,” Bernardino Leon told reporters.

Leon called on politicians to work inclusively and democratically for a political road map and to “enable peaceful early parliamentary elections.”

“Today the GNC is beating the drums of war. They want to drive the country into an armed conflict for power after all peaceful and political means have been exhausted … They are leading the country into a direct confrontation,” Al-Habeeb al-Amin told Libya al-Ahrar TV.

Mitig, a businessman from the city of Misrata, was chosen to form a cabinet earlier this month in a disputed vote pushed through by the Islamist blocs.

For months, divisions between Islamists and more moderate blocs within the GNC have nearly paralyzed the political process and increased tensions in the country among militias affiliated with the different parties.

The emergence of Haftar and his self-declared Libyan National Army escalated tensions last week, as the retired general called for the overthrow of the GNC he described as “illegitimate.”

Haftar also launched what he called an open-ended war on Islamist extremist groups and vowed to “purge” Libya of them. His campaign has widened divisions in the country with Islamist and anti-Islamist camps.

In an effort to try to ease tensions, Libya’s electoral commission announced early elections will be held on June 25.

On Friday, Libyans rallied in Tripoli, Benghazi and other Libyan cities in support of the campaign led by Haftar. While some Libyans don’t back the ex-general and don’t want want military rule, they support what he is doing.

But some say his campaign is an opportunistic strategy capitalizing on growing discontent in Libya with a weak central government and a deteriorating security situation.

Haftar was once a general in the Libyan army under dictator Moammar Gadhafi but had a falling out with him and immigrated to the United States, where he lived for almost 20 years. He returned in 2011 to participate in the revolution that overthrew Gadhafi.