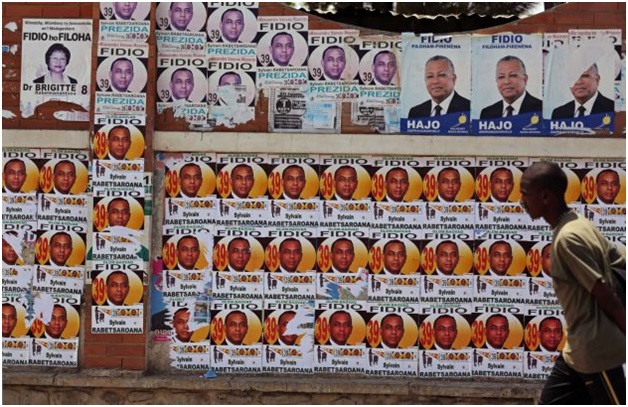 Voters in Madagascar are going to the polls in the first election since the military-backed coup four years ago.

Two front-runners are competing with a similar pledge to rebuild Madagascar’s economy after years of political and economic crisis. Thirty-three candidates are contesting the election, which has been postponed three times this year. Over 92% of the country’s 21 million people live on less than $2 (£1.2) a day, according to the World Bank.

President Andry Rajoelina ousted Marc Ravalomanana from power in 2009, plunging the island nation into political turmoil and leaving the country isolated by the international community and deprived of foreign aid. After seizing power, Mr Rajoelina announced that there would be a new constitution and elections within 24 months.

In May 2009 it was agreed that all former presidents would be allowed to stand in the election. However, these failed to take place in 2009 or 2010.

In January this year Mr Rajoelina and Mr Ravalomanana both agreed not to stand in the polls, in line with a plan by the Southern African Development Community (SADC), a regional bloc that Madagascar belongs to.

The first round of this election was set to take place in July 2013 but was pushed back to August because Mr Ravalomanana’s wife and former first lady, Lalao – and then Mr Rajoelina himself – decided to run, prompting donors to suspend financing for the poll.

Mr Rajoelina and Lalao Ravalomanana were then barred from standing and the electoral court also struck former President Didier Ratsiraka from the list of candidates after the three refused to withdraw.

The African Union had said it would not recognise the results if any of the three were declared the winner.

Mr Rajaonarimampianina, a former finance minister in the transitional government, says he aims to help the unemployed, build infrastructure to improve agriculture, reform the education system and make Madagascar a strong democracy.

The polls will be run by the Independent National Electoral Commission of the Transition (Cenit), an independent electoral body funded by the United Nations. No firm date has been set to announce the results but if no candidate receives more than 50% of the votes cast, a second round will be held on 20 December, along with the parliamentary elections.

Cenit says there are 7,697,382 registered voters and 20,115 polling stations in Madagascar, a country the size of France with a scattered population.