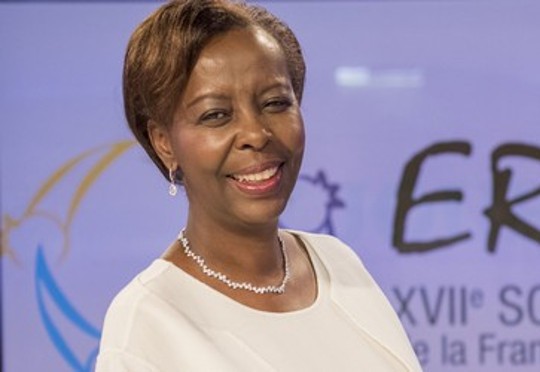 Minister of Foreign Affairs of the Republic of Rwanda, Louise Mushikiwabo, has been appointed the new Secretary General of La Francophonie. She was elected by acclamation by the Heads of State and Government meeting at the XVII Francophonie Summit in Yerevan.

The role of the Secretary General

The Secretary General heads the International Organization of La Francophonie (OIF), of which she is the legal representative. She appoints the Director of the OIF who performs his duties by delegation. OIF is the backbone of the French-speaking multilateral system, associating the Secretary-General’s power of political initiative to cooperative actions.

The Secretary General leads the political action of La Francophonie, of which she is the spokesperson and the official representative at the international level. In the field of cooperation, she is responsible for the animation of the French-speaking multilateral cooperation and chairs the Cooperation Council, which brings together the Administrator of the OIF and the leaders of the Parliamentary Assembly of the Francophonie (APF). ) and specialized operators (AUF, TV5, AIMF, Senghor University). The Secretary General is represented in the bodies of the operators.

The Secretary-General proposes the distribution of the Single Multilateral Fund and orders its allocation.